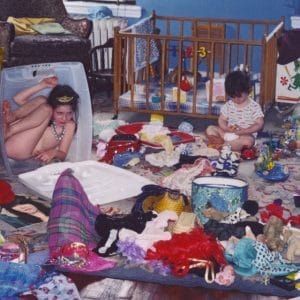 ‘Hook them in, right from the beginning’. It’s one of the unwritten laws of great art. “It was the best of times, it was the worst of times”. Ewan McGregor’s feet pounding the Edinburgh streets as Iggy Pop‘s Lust For Life plays. Kurt Cobain‘s guitar riff that introduced Smells Like Teen Spirit to a world on the verge of changing.

And now, you can add the opening song to Sharon Van Etten’s Remind Me Tomorrow to that stellar list. As opening lyrics go, “Sitting at the bar, I told you everything – you said ‘holy shit, you nearly died'” has pretty much everything you want to hook you into a song.

Of course, on previous records, Van Etten has indeed told us everything, and anyone familiar with her works to date may expect this to be followed by a tale of domestic trauma or emotional abuse, but Remind Me Tomorrow is different. It’s the sound of an artist taking an alternative turn.

The Van Etten of 2019 isn’t the same person that we last heard from five years ago with the superlative Are We There album. In that time, she’s settled down with her former drummer Zeke Hutchins, had a child, studied for a psychology degree and taken up acting, appearing in Netflix’s The OA and singing in David Lynch‘s return to Twin Peaks.

Musically, she’s moved on from the folky Americana that made her name, and moved towards a more doomy, synth-based sound. Yet it suits her down to the ground. The single Comeback Kid sums up her new approach ñ full of beats and eerie keyboard sounds, but no less approachable than her previous work. Lyrically too, Van Etten is in a emotionally healthier place – whereas previously she was trying to get away from men who “enjoy sucking on dreams”, now, on a track like Malibu, she blissfully watches her lover clean the floor while the Black Crowes play in the background.

If Van Etten is more settled though, that hasn’t dulled her songs of their emotional impact. Seventeen is a beautifully poignant letter to her teenage self, reassuring her that everything will (eventually) turn out alright: “I see you so uncomfortably alone, I wish I could show you how much you’ve grown”. It’s probably the catchiest song on the record, and at times recalls Springsteen in its powerful look back on a less than idyllic youthhood.

Her storytelling skills are equally strong on Malibu, the tale of “a couple of dudes who don’t give a fuck” driving around the Californian city in a “little red car that doesn’t belong to you”, and on the arresting surge of Comeback Kid, where Van Etten can conjure up a million images with a simple line like “got a job now my brother found, working nights just a mile away”.

Perhaps the most startling aspect of Remind Me Tomorrow though is the sound of it – assisted by producer John Congleton, who has worked with St Vincent and Sleater-Kinney amongst others, the album is dominated by the sound of a Jupiter 4 analogue synth (borrowed from actor Michael Cera) which adds a haunting, sometimes portentous, air to many of the tracks.

The Jupiter 4 adds a hazy air to Memorial Day, and gives a muscular swagger to the biting Hands, while the track which is actually named after the instrument itself is suitably droney. These are songs that are a world away from the hushed folk of Van Etten’s debut, but they demonstrate just how far she’s evolved as a songwriter.

It may be very different to her previous work, but in it’s own way, it provides just as much an emotional gut-punch. In recent interviews, Van Etten has said she intends to be working full-time as a psychotherapist by the time she reaches 50 – if that means we’ve got just over a decade left of music from her, then that is time which should be treasured.