by Helen Clarke
published: 11 May 2013 in Album Reviews
Tweet 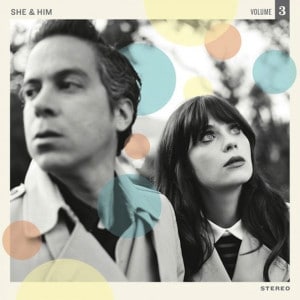 There was a great moment in the kooky indie rom-com, (500) Days of Summer – the film that cemented Zooey Deschanel’s reputation as the leader of the “adorkable” set – when her character, Summer, pushes past the drunks at a karaoke bar to sing Nancy Sinatra’s Sugar Town. Her giggling tone and irresistible inflections played it exactly right; it was breezy, casual and fun – like she was just having a laugh, lost in the moment.

The first She & Him album came out a year before that film, in 2008, and was of a similar vein; She & Him – M Ward – playing around, having fun with some ’60s-influenced pop. It worked well. So it’s a shame that their third outing has ironed out the kooks and cracks that made them so endearing.

By now a well-respected duo – Emmylou Harris and Camera Obscura are lined up as support for their US tour – Deschanel has hit the mainstream with sitcom New Girl, while M Ward has carved a successful career both as a solo artist and with supergroup Monsters Of Folk, alongside members of Bright Eyes and My Morning Jacket. So it’s surprising that they found the time to get Volume 3 – which is made up of 11 Deschanel-penned tracks and three covers – together. Sound and theme-wise, it’s business of usual; Deschanel leads the way vocally, while Ward steers with subtle, steady twangs. It’s innocent and dreamy, with songs about wanting “someone sweet to talk to”, but always sung with a coquettish wink that almost parodies her onscreen image.

Vocally, Deschanel looks to the likes of Loretta Lynn and Patsy Cline for influence, while Ward’s folky-country leanings result in a Rilo Kiley-ish sound, most notable on the more upbeat tracks, like opening song I’ve Got Your Number Son. With surf guitars backed by Phil Spector-ish girl band “Oooohs”, it’s what She & Him do best. Elsewhere, I Could’ve Been Your Girl tries to do the same but suffers the same fate as much of the rest of the record; it just doesn’t have the melodies needed for musically simple songs which rely so much on catchy choruses and interesting vocal concepts. Likewise, Somebody Sweet To Talk To, starts off promisingly, with a Belle and Sebastian-ish piano backing, but loses its way 30 seconds in. Gloomy piano ballad London, which documents Deschanel’s love for our capital, despite its weather and tendency to make her blue, steps away from the swooshing ’60s pop sound and is a highlight.

The album’s cover versions come courtesy of a faithful version of the many times recorded Hold Me, Thrill Me, Kiss Me; a similarly straight take on Sunday Girl, which sees Deschanel flit from English to French; and the Jeff Barry-penned Baby. None of them have the spark or even a sprinkling of the charm that Sugar Town had; like much of Volume 3, they’ve been polished to within an inch of their lives. Ward produced the album himself, so perhaps it was an attempt to etch a different sound, so their side project wasn’t seen as just an extension of the Zooey show. Or maybe their busy schedules meant that there just wasn’t enough time to work it up into that special something.

She & Him on Spotify