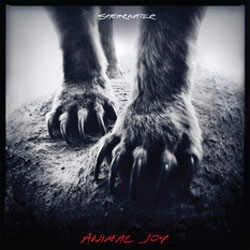 Originally a side project led by Jonathan Meiburg and Will Sheff, both founder members of the critically acclaimed Okkervil River, Shearwater share their parent act’s gift for writing sensitive, literate yet epic songs that are simultaneously tuneful and rich in musical textures.

The two main protagonists went their separate ways in 2009, with Meiburg retaining leadership of Shearwater, but despite this severance of ties, interestingly both bands seem to be travelling in similar directions. Last year’s I Am Very Far saw Okkervil opting for a more muscular, direct style than ever before; likewise, Animal Joy signals a change in dynamic for Shearwater following the hushed, dreamy atmospherics of 2010’s The Golden Archipelago.

Like the long-winged seabird that inspired his band’s name, Shearwater front man Jonathan Meiburg’s voice soars impressively above its surroundings. A powerful yet velvety and versatile tenor sat somewhere between Jeff Buckley and Antony Hegarty, it has been the dominant instrument in the Austin, Texas trio’s seven albums to date, but on Animal Joy other elements of the band’s sound are pushed more to the fore – not always successfully.

In particular, Thor Harris’s monumental drumming is integral to Shearwater’s approach here like never before. At times, such as on the urgent, driving Pushing The River, Harris’s frenetic tub thumping propels the song impressively, and some muffled tom-tom provides an effective counterpoint to the shimmering harp of Running The Banner Down. Elsewhere though, the often cacophonous percussion is allowed to distract too much from the band’s more delicate charms. The industrial beats and stark, staccato guitar riffs of Breaking The Yearlings suffocate the song trying to break through underneath, while closing track Star Of The Ages is forced and overwrought.

Shearwater are at their best when at their most restrained, or when their songs are allowed to build slowly, giving the different complementary parts space to breathe. Perhaps the best example of this on their latest record is the opening Animal Life. Beginning with just a simple, chiming guitar melody and Meiburg’s emotionally charged falsetto, it gradually introduces drums, piano and swathes of reverb as it gathers momentum towards a stirring conclusion. On other tracks, such as Open The Houses and Believing Makes It Easy, they effectively summon up the loose limbed ambience of Spirit Of Eden-period Talk Talk.

Meiburg has always been a thoughtful, idiosyncratic lyricist and Animal Joy sees him at his most personal and introspective. Open The Houses begins with the evocative couplet “I was still life/I was pinned inside of a photograph” as he reflects on the realisation that time is moving on without him, and on You as You Were he compares the sensual intimacy of physical contact to “the electric charge of a change in the weather/you were touching my arm, you were holding a feather.” Not quite Byron perhaps, but a cut above the average over-earnest modern troubadour nevertheless.

Taken as a whole, Animal Joy maintains the quality of Shearwater’s earlier outings without quite taking things to the next level they’re eminently capable of achieving. Meiburg’s voice is of rare range and beauty, but it seems the band have yet to settle on the best way to maximise its formidable gifts. If they were to cut down the bombast just a little and concentrate on their gentler, subtler qualities, then a truly great album is definitely within Shearwater’s grasp.