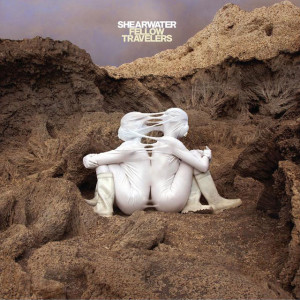 Taking into account the greatness of 2008’s Rook, Austin, Texas band Shearwater’s output over the past five years has been solid but fairly by the numbers. 2010’s The Golden Archipelago and last year’s Animal Joy were worthwhile, if not quite electrifying, entries in the band’s catalogue. So it’s at least nice that Fellow Travelers, a covers album of songs from bands with whom Shearwater has toured that’s sandwiched in between Animal Joy and a likely album in 2014, at least proves that Jonathan Meiburg and company are willing to take risks in contrast to the safe territory of their past couple records, even if, like most covers albums, it’s a mixed bag.

Starting with what works, the band’s version of Coldplay’s middle-of-the-road Hurts Like Heaven is a natural fit for Meiburg’s sometimes subdued, sometimes dramatic wail in conjunction with his beautiful piano work. Shearwater’s version, in addition to many of the covers on Fellow Travelers, is a stripped down, but reverb-laden version of the original, one whose echo but surprising restraint makes it automatically more interesting than Chris Martin and company’s balls-out emotional delivery. But really, what’s most surprising about the cover is that it reminds listeners that Shearwater once toured with Coldplay (on 2008’s Viva La Vida! tour). While Coldplay always go for the grand statement, Shearwater sound best in an intimate space, but their cover of Hurts Like Heaven actually fills up more space with fewer instruments; it’s a successfully captivating experiment.

Meanwhile, their cover of Xiu Xiu’s noisy, intense, and affecting I Luv the Valley OH!!! is turned even louder and more anthemic with stadium-sized riffs and percussion. Meiburg and company manage to be faithful to the original but turn it into a more accessible track, which ultimately shows that Jamie Stewart’s song was a great pop number at heart. In essence, if Shearwater’s cover of Hurts Like Heaven surpassed and rendered the original insignificant, their cover of I Luv the Valley OH!!! makes the original even better. The same goes for their cover of Clinic’s originally lo-fi, harmonica-laden Tomorrow. On Shearwater’s version, big guitars swallow Meiburg’s swoony voice (his voice is strangely far back in the mix on virtually every track on Fellow Travelers). For those who know Tomorrow as the brilliantly-written drinker’s tale, to hear Shearwater obscure the lyrics renders it a bad introduction to the far superior Clinic version even if the Shearwater version sounds interesting in its own right.

What really doesn’t work, on the other hand, and most disappointingly, is a cover of St Vincent’s delicate-with-a-mammoth-chorus Cheerleader. While the song starts out promisingly with a Neil Young-like Laurel Canyon riff, Meiburg’s voice remains unflatteringly constant throughout, whereas what made the Annie Clark version so effective was the push-pull of her soft, then mighty voice. And while the only song that’s not a cover on Fellow Travelers, the Sharon Van Etten Record Store Day collaboration A Wake For The Minotaur, is perfectly nice and fine, it’s a shame Shearwater don’t have some fun, depart from their miserabilist aesthetic, and cover Tom Petty & Steve Nicks’ Stop Draggin’ My Heart Around like they did so excellently on their tour together.

The extent to which Fellow Travelers is a preview of a newfound aesthetic for Shearwater’s upcoming LP is unknown. While their cover of Hurts Like Heaven shows new territory for the band, their half-the-length-of-the-original cover of Wye Oak’s originally plodding Mary Is Mary sounds like quintessential Shearwater. One hopes that the Austin band takes lessons from both the successes and failures of Fellow Travelers: taking risks here and there often pays off, but don’t mess with a vocal formula that works.