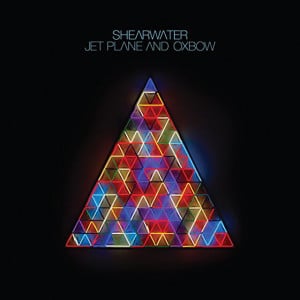 Originally intended as a one-off side project for Okkervil River’s Will Sheff and Jonathan Meiburg back at the turn of the century, 15 years or so later Shearwater are still very much an ongoing concern, with Meiburg leaving Okkervil River in 2008 to focus solely on his second band.

Used initially as an outlet for Meiburg and Sheff’s softer songs, which they considered a little too understated for Okkervil River’s more robust sound, Shearwater have gradually evolved, from the austere acoustic Dissolving Room through the dreamy atmospherics of The Golden Archipelago to the more anthemic, radio-friendly choruses of 2012’s last album proper, Animal Joy.

After the interesting, if inessential, covers collection Fellow Travellers in late 2013, Jet Plane And Oxbow sees Shearwater continuing to develop in new directions. Prime is a relatively low key beginning, with gentle flurries of synthesiser backing a restrained vocal performance from Meiburg. But Quiet Americans sees Jet Plane And Oxbow really come alive. With its stark electronics and a soaring, acerbic chorus delivered in a rich baritone, it has similarities with the last two John Grant albums and is one of the best distillations of a theme running through the record: US citizens struggling to come to terms with their role in the modern world.

As their ornithological name suggests, Shearwater have often been inspired by nature in their previous work, but here the focus is very much on man-made society and its impact: the album’s title came from a moment when Meiburg looked out of the window of a Boeing 737 to see another plane, passing below, bisect a loop of the Mississippi. This is not the work of your average musician.

While the songs may on a first listen seem similar in style to those on Animal Joy, gradually it becomes apparent there is a greater depth and texture here. The new ingredient is the involvement of film composer and percussionist Brian Reitzell, whose credits include The Virgin Suicides and Lost In Translation, and who adds an array of unorthodox instruments and tempos which make Jet Plane And Oxbow a more layered, sonically interesting proposition.

For example, the urgent, clattering rhythms and the Middle Eastern timbre of the guitar in the closing stages of Filaments transform an otherwise ordinary track into something quite intriguing, while the ghostly echoes and murmuring industrial noise that inhabit the margins of the closing Stray Light At Clouds Hill add a palpable sense of quiet doom.

At other times though, the simple quality of Shearwater’s song writing alone is enough to engage the listener. Only Child is a lovely, piano-led rock ballad but perhaps the standout track on the whole album is the beautifully elegiac Wildlife In America, a song steeped in sadness and memory, ending with the wonderful lines “You’ve got your mother’s eyes/ You’ve got your father’s heart/ Look what it did to him.”

There are a few missteps too – Radio Silence is nearly seven minutes of plodding nothingness – but in general Meiburg’s craft remains in rude health. Whether this is Shearwater’s finest album is debatable; some fans may still miss the more rustic, hushed and unpolished vibe of 2006’s Palo Santo. Undoubtedly, though, it’s a record of confidence and passion, fronted by a man with plenty to say.