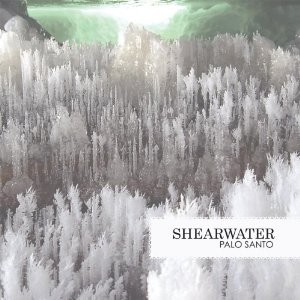 Excuse me while I catch my breath. Why? Because my senses have been scrambled, my head twisted, my preconceptions shredded.

I knew that Shearwater were an offshoot of Okkervil River and that this was a record dedicated to the memory of Nico but I would have never believed, dreamt even, that it would be this glorious.

This is indie music, no strike that, rock music reduced. The power chords, the drum fills, the bass runs and middle eights stripped away. This is music as chalk outlines, as murmurs, echoes, fables, reconstructions. It’s a sun bleached Warhol screen print with only the dark outline remaining. The songs are minimal, brittle, full of suggestions and silences before they turn to become harsh pluming, frayed and asphalt black.

The opening sound is one of near silence. Gentle whispers of radio static bathing the softly intoned vocals. A sparse rattle of piano keys splash a little colour across the mix followed by a brief set of piano chords, the song seems to dissolve into the ether. You are snapped back awake by a brief cry, a holler from Jonathan Meiburg. He sounds terrified – possessed even. The moment passes, but I am hooked.

Meiburg’s vocals melt perfectly into the backing track, his voice become another element in the soundscape that builds with a languid grace. Close your eyes and it could almost be Talk Talk circa Spirit of Eden and Laughing Stock. Yes – that special.

Red Sea, Black Sea, with its primal beat and menacing strings, could be the Velvet Underground performing Eastern European folk – rather apt when you think about it. The thickets of banjos that propel the track forward are steely and tightly wound. White Waves chugs along on a garage rock chord sequence, feedback sweeping through the mix before it drops away to the barest of piano notes before starting its ascent again, the feedback swarming across the melody.

Seventy-Four, Seventy-Five is driven by a strident piano that apes that of John Cale‘s solo work. The song is fleshed out by warm brass and tender feedback. Johny Viola maps out similar terrain, the abstract lyrics about love lost could be a lament for the failed relationship between Cale and Nico. Meiburg’s vocals soar above the melody line lost in melancholy reverie.

The gentle acoustic trance of Failed Queen is the loll that ushers in the onslaught of Hail, Mary. A slow build from an organ tracing out the trajectory of the track. Meiburg’s voice finds hidden corners, pauses and silences, reaching higher to express his pain. Around him the mesh of instrument build, the thwack of a snare like an anvil, a revolving set of chords ripped from a guitar, strings, a piano the sound denser, more complex. They suddenly fall away leaving Meiburg’s naked voice quivering in the vacuum. Hail, Mary escalates again, wordless, just the firestorm of guitars and rhythm closing the track out.

Palo Santo is the most perfectly realised piece of art I have encountered in a very long time. From the cover artwork, through the arc of the songs, to the arrangements and the execution this is perfect. A record with which I cannot find fault, evocative and majestic.