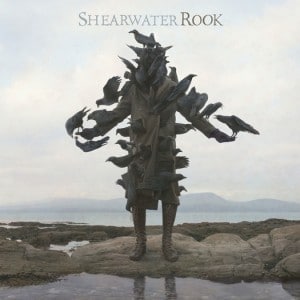 As Shearwater prove on their fifth album Rook, there’s more to pastoral pop music than Kate Bush swaying her arms back and forth in a sun-dappled woodland glade. Shearwater’s music is deeply rooted in nature, yet there’s nothing cute or cuddly about their take on the pastoral – this is the sound of the wilderness, the desert and the savage coast.

In keeping with its lyrical preoccupations with the natural world, using the imagery of fairytale and Victorian poetry to hint at deeper meaning, Rook is almost entirely untainted by the modern world. Much of the instrumentation (harps, strings, woodwinds) could have been called upon any time in the last 200 years; and overall the album’s sound is anchored by Jonathan Meiburg’s bold, soaring tenor rather than my any new-fangled electric or electronic devices.

If there’s a precedent in recent pop music, it’s Talk Talk‘s Spirit Of Eden: both in terms of composition (voice-led songs backed by elegant, dramatic arrangements) and the quiet-loud dynamics which alternately seduce and threaten the listener’s ear. Opener On The Death Of The Waters is a case in point. At first, there’s a delicate piano melody hiding behind muttered yet impassioned Mark Hollis vocals. But resist the temptation to turn the volume up to 11, because around the corner there’s an explosion into deafening, slo-mo Godspeed You! Black Emperor thunderstorms.

Most of the album tracks marry Meiburg’s high vocal register with classical instrumentation, though this is no pretty chamber pop. There’s always a sense of greater ambition at play here: whether it’s through Meiburg stretching his extraordinary voice to its upper limits, or through the refusal to play the verse-chorus game, or through the intention to milk every moment for maximum drama. At times this stretches things a bit: Lost Boys, for example, plays the Joni Mitchell card of leaving a raw vocal floating in the ether – which, like much of Mitchell’s ’60s output, treads a fine line between hairs on the back of the neck and fingernails down a blackboard.

Two tracks burst free of this formula, both gesturing towards mainstream appeal. Rooks is jaunty, swooping, and anthemic; and, with its perfect balance of tender vocals and rock and classical instrumentation, wouldn’t have been out of place on R.E.M.‘s Automatic For The People. Century Eyes, by contrast, is closer in tone to R.E.M.’s Monster: rousing and shabby; full of fuzzy guitars and big, obvious chord changes. Oh, and somewhat at odds with a singer’s voice not 100% suited to rocking out.

Lyrically, former ornithologist Meiburg is clearly obsessed with finding allegorical meanings within the natural world, with constant references to our feathered chums and their habitats. Rook, in particular, introduces us to a veritable parliament of fowls: swallows, starlings, rooks and ravens all pop up to evoke serenity, exuberance, menace, and a whole host of other emotions. Unless you’re a card-carrying member of the RSPB it feels a little mannered at times.

That said, Rook is a hugely self-assured and often compelling album, which looks outside of the world of modern man for inspiration, and in most cases, finds it in spades.