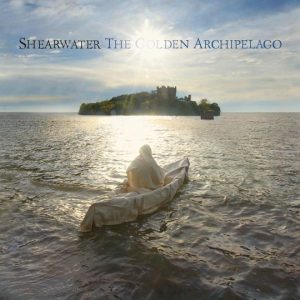 You’ve got to admire Shearwater. To so many bands the notion of songwriting consists largely of stroking their chins for a couple of hours before scrawling down a few rhyming couplets about the birds they fancy. In stark relief, birdwatcher Jonathan Meiburg likes to prepare. Thoroughly.

For instance, he’ll undertake a Darwinian quest to visit many of the world’s most far-flung islands, paying close attention to their physical geography, human geography, history, weather, and wildlife, all in order to inform the writing and recording of the new Shearwater album, The Golden Archipelago.

Meiburg has even prepared a loose-leaf dossier to accompany his adventures, incorporating everything from the national anthem of Bikini Atoll to missionaries’ accounts of remote Aboriginal villages – and it’s available only by pledging cash direct to the band. But how has this exhaustive preparation rubbed off on the album itself?

In truth, what may have been a concept album about the world’s islands turns out to be rather more of an impressionistic, emotional journey than an informative or literal one. Meiburg’s travelling experiences and background research have clearly inspired him, but it’s the feelings rather than the textbook detail which he chooses to pour into his music. In this sense, from the listener’s point of view, The Golden Archipelago functions more as a companion piece to their previous album Rook, which played a similar trick with the similarly outlandish theme of ornithology.

As with Rook, much of the songwriting is driven by Meiburg’s swooping tenor, leading the listener through unfamiliar soundscapes where nothing is quite as it initially seems. Like Joanna Newsom‘s Ys, The Golden Archipelago eschews conventional verse-chorus structures, winding its way instead through linear compositions which occasionally return to the same motifs but more often strike out in unexpected directions.

Fans of baroque, overblown concept pop will quickly notice many similarities between the album and the Ninth Wave suite from Kate Bush‘s Hounds Of Love album – voice-led songs; unusual arrangements; the influence of Tennyson, Britten, and the ceilidh; and, most strikingly, the nautical backdrops of shanties, hornpipes and piratical yowling.

On Black Eyes, you can almost picture Meiburg perched atop a crow’s nest, strapped to mast and howling at the firmament: “Look down on the rolling waves / That strike on the crumbling reef.” It’s shivers-down-the-back-of-the-neck stuff.

There’s plenty to admire elsewhere: the Scott Walker-like poise and atmospherics of Meridian; the delicate, piano-led beauty of Hidden Lakes; or the carefully-handled quiet-loud drama of God Made Me, which ingeniously recreates the tone of a ballad within a much more complex song structure. Admirers of Rook are very unlikely to be disappointed.

For all its good points, The Golden Archipelago is a slightly patchier offering than its predecessor. On the more bombastic numbers, the lyrics are elusive and ambiguous. So, with Corridors, Meiburg’s vocals creep into the realm of the histrionic, supported by end-of-the-world drumming and a lyric which may or may not be Guantanamo-related. Equally skippable is Castaways, a brassy Celtic-tinged call-to-arms which rather sounds like being shouted at by Simple Minds‘ Jim Kerr.

Yet The Golden Archipelago is an admirable achievement: a project that has been meticulously prepared and executed with passion and flair. Clear similarities with Rook mean that the album won’t lose Shearwater any fans, and there’s enough of a step forward to count this as a fine complement to their existing work. As ever, Meiburg’s intensely personal, often unreadable vision is utterly central to Shearwater’s work, and it’s up to the listener to fill in the gaps. The decision on whether to be seduced is entirely yours.