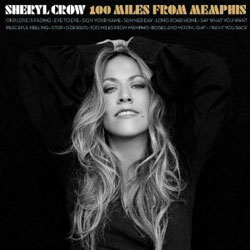 100 Miles From Memphis is a sea change for Sheryl Crow. In place of her usual acoustic pop tunes, Crow has returned to the kind of music she loved as a kid growing up in the shadow of one of America’s hottest soul hotbeds. The result finds her sounding more at home and effortlessly exuberant than she has since Tuesday Night Music Club.

Amid the white noise of the soul revival (see Amy Winehouse and Duffy) Crow sounds refreshingly genuine. Her road-worn voice seems made for these tunes and, alongside co-producer Doyle Bramhall II, she’s created a completely convincing window into the joyful golden age of soul. But it’s not just nostalgia or an attempt to recapture bygone sounds; Crow lends the album the feel of the prodigal returning home to open the fire hydrants and dance in the street.

Crow still treads the same lyrical ground she always has: sunshine, searching for connection, questioning the American political climate. She’s just changed the method of delivery. Sure, there’s a bit of the usual Sheryl Crow politics (as on the sombre Say What You Want) threatening to rain on the parade, but the fun wins out.

Our Love Is Fading opens the album with a dose of soul-blues, and establishes Crow as a capable bandleader, perhaps under the whirling lights at a roller rink. “Some day when you’re older, and you search the world over, you might wish you could hold someone,” she sings amid building B3 organ and escalating horns.

Keith Richards contributes guitar work to the reggae-styled Eye To Eye. Citizen Cope sings along on Sideways. Justin Timberlake does a bit of background vocals on Terence Trent D’Arby‘s mid-tempo brooding jam, Sign Your Name. Here, Crow sings “Sign your name across my heart. I want you to be my baby” while forcing Timberlake to fade into the background, and managing to upstage his neo-soul tenor at every turn.

Lead single Summer Day channels the same let-the-sun-shine vibe as 2008’s Soak Up The Sun, but the old soul sound fuses with the message to give it a nearly transcendental wonderfulness. “A summer day that I recall, you came into my life and you let me fall in love,” she sings amid horns, strings, and backup singers.

But the most thrilling track on the album is the bonus track, a spot-on cover of The Jackson 5‘s I Want You Back. It’s here, in her faithful recreation of a young Michael Jackson‘s controlled, soulful wail that Crow reveals herself at her truest; she’s obviously a student of soul who’s been living in seclusion for too long.

Where will 100 Miles From Memphis land with listeners? There’s a good chance that will alienate some of Sheryl Crow’s fan base, so far removed is it from her previous body of work. There’s also a chance that devotees of the soul revival will dismiss Crow as a poseur. But one listen to the album reveals that, at least in her mind, she’s the genuine article, and that she’s feeling the need to let herself loose.