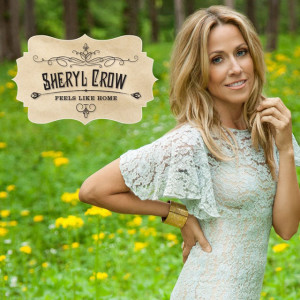 Though it’s easy to file Sheryl Crow in the moth-eaten corner of your mind where hazy memories of 1990s chart botherers reside, it turns out that the multi-faceted Missourian has coaxed her solo success to relatively consistent levels for more than 20 years. Eight LPs, all of which were Billboard Top 10 hits; a mantelpiece full of industry awards; a clutch of well-received acting roles. Who knew?

All the same, her exploits since the runaway success of 1998 album The Globe Sessions have never quite jived internationally, 2002 single Soak Up The Sun notwithstanding. The timing, then, is both awfully perfect and perfectly awful for Crow to release her first country album (“So what were the other eight?” you ask); a move that would seem to suggest consolidation in the US at the likely expense of sales overseas. It’s also her first album since an 18-year relationship with previous label Interscope hit the skids, making this a case of new imprint, slightly new direction.

The shift to country, of course, makes perfect sense for an artist whose particular stripe of pop has always veered towards Americana. Indeed, with previous collaborations with the likes of Emmylou Harris, Dwight Yoakam and the Dixie Chicks, it’s perhaps not surprising that Sheryl describes it as “coming home”. Wrangling the metaphor to its knees like a cowboy at the Cheyenne Frontier Days Rodeo (where Crow once performed to the outrage of animal rights activists), her ninth album gained its title – Feels Like Home.

It initially appears that subtlety is not to be one of the album’s strengths, but one suspects that’s probably intentional; country music, after all, is known for its tendency to take on bold subjects in plain terms. So is the case with album opener Shotgun, whose jaunty, lighthearted, stop-start riff leads into full-throated auto similes: “Drive it like it’s stolen / Park it like it’s rented / What good is your money / If you ain’t gonna spend it?” With that, the expectation is set: this is to be an LP all about the good times.

Except that it isn’t. Lead single Easy – already a bona fide hit – opens like Tom Petty mega-smash Free Falling, Crow singing from the comfort zone about the comfort zone. “We’ll play Jack Johnson / He’s the new Don Ho,” she exclaims in absolute earnestness. Yet the theme is reversed in later track Homecoming Queen, which laments lost youth, abandoned ambitions and a hypothetical marriage that is neither good nor bad. In the space of an album, we discover the difference between contented coupon cutting and chronic coupon cutting.

It’s a strong testament to Feels Like Home’s sheer quality that such balance is present throughout. For every Give It To Me and We Oughta Be Drinkin’ (the former a dusty, down-home jive; the latter a sozzled revival of All I Wanna Do’s yearning for fun) there’s a number like Callin’ Me When I’m Lonely, whose soaring chorus aims squarely at the airwaves and lands in slap-bang Shania Twain territory. In other words, it’s a success – though actually one of only two songs not written or at least co-written by Sheryl herself.

Waterproof Mascara is probably the album’s lyrical zenith. Written from the point-of-view of a single mother – an experience to which Crow can relate – it runs the gamut from loneliness to anxious maternal love. When the chorus craves for the title’s resilient make-up “because it won’t run like his daddy did”, one can’t help but bring to mind the adroit lyricism of a Tammy Wynette or Dolly Parton. A mite heavy-handed, yes, but smart nonetheless.

The album’s equilibrium continues into its coda. Crazy Ain’t Original and Best Of Times combine southern stylings with political themes just noticeable enough to keep the brain ticking over and the toes tapping, before Homesick flips the album’s general premise on its head: the song’s protagonist longs for home only to find it empty. Like the preceding tracks, it’s classy, adroitly produced and a clever component of an altogether admirable whole.