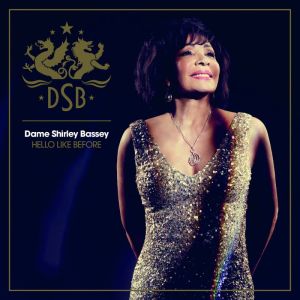 A few years ago, it seemed as if Dame Shirley Bassey was repositioning her career for a whole new audience. She was working with producers like The Propellerheads and David Arnold, covered a Pink song and had tracks specially written for her by the likes of Manic Street Preachers, Richard Hawley and the Pet Shop Boys on her rather fine album The Performance. It may not have quite introduced her to a new audience like the career renaissance of Johnny Cash, but it certainly helped to extend her already staggeringly long career of over 60 years.

Five years after that work, Bassey’s gone back to basics for Hello Like Before. It’s a curious hotch-potch of an record, consisting of a couple of live tracks, re-recorded versions of her most famous hits and cover versions of both well-known and less-known songs, recorded at the legendary Abbey Road Studios with the help of the Royal Philharmonic Orchestra.

At 77 years of age, Bassey still has an impressively powerful voice – it’s one of the most unmistakable vocals in music history, and she sounds as emotion-filled as ever throughout Hello Like Before. To hear her belting out MacArthur Park (itself one of the more over the top songs ever written) is quite an experience, especially with a truly barmy brass arrangement that threatens to turn into Live And Let Die at one point. Sadly though, this is one of the few thrilling moments on the record.

The trouble is that most of Hello Like Before is pretty predictable. Nobody, but nobody, needs yet another version of Goldfinger, especially when the version presented here is so close to the original. The same goes for Fever, the old Peggy Lee classic – sure, Bassey gives her all as you’d expect, and can still reach all the relevant notes, but it all seems so pedestrian and by-the-numbers.

Another much covered standard is Diamonds Are A Girl’s Best Friend, on which Paloma Faith pops up to guest – she works well with Bassey, and wisely decides not to compete with her vocally, instead adopting a curious Eartha Kitt-style growl throughout. It’s one of the better tracks on the album though, only spoiled by a horribly contrived spoken word outro which can’t fail to produce a cringe.

The big band arrangements also don’t do Bassey many favours – a cover of Sting‘s An Englishman In New York takes all the quiet yearning and wonder from the original and replaces it with a whole load of bombast and bluster, while far too many tracks such as We Got Music and Hey Jude sound like the house band on Strictly Come Dancing tackling another much-loved classic.

Now and again, things click nicely into place – Bassey says she’s been waiting until the age she is now to record Frank Sinatra‘s It Was A Very Good Year, and she delivers the song with a subtlety and poignancy that’s missing elsewhere. Her version of Mario Biondi‘s This Is What You Are is another of the better tracks, possibly due to being less well-known than the others, and makes for a fine opener to the album.

Ultimately though, this is an album squarely aimed at the older end of the market, just in time for Christmas. There are plenty of decent compilations that showcase Bassey’s considerable talent which would probably be a better buy for the uninitiated. As it stands, Hello Like Before is one for the hardcore collector only.