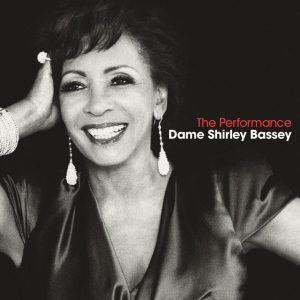 Fully 45 years ago Shirley Bassey strode onto the music scene and belted out John Barry’s theme to the James Bond film Goldfinger. She’d return to the glamorous 007 franchise for the theme songs for Diamonds Are Forever and Moonraker, becoming to this day the only artist to perform three Bond themes.

Her own life mirrored the pizzazz of Ian Fleming’s exotic locations and well-dressed protagonists. Now resident on – where else? – the Cote d’Azur, the girl from the Welsh valleys is now a Dame and a legend in her time. Yet sit back and take your pick of any song on The Performance and hazard a guess at the singer’s age. It’s unlikely your guess would be 73.

Like Ute Lemper and Marianne Faithfull before her, with this David Arnold-produced opus Bassey is given a set of songs to sing by contemporary songwriters including Richard Hawley, Pet Shop Boys, Rufus Wainwright and Manic Street Preachers, scored and several co-written by Arnold himself. His predecessor on the Bond franchise, the original instigator himself John Barry, contributes Our Time Is Now, a co-write with Don Black.

She’s legendarily at her most powerful with the biggest of emotions, that inimitable voice soaring over orchestration that pays homage to Barry’s trademark sound, mixing strings and brass with guitar and drums. No Good About Goodbye, Black’s co-write with Arnold, is the album’s high point for this, full of Bond theme touchstones and Burt Bacharachian lyrical nods. In a similar retro area, anyone familiar with the distinctively Barryesque orchestration on Pet Shop Boys’ Beautiful People, from recent album Yes, will see Neil Tennant and Chris Lowe’s graduation to Bassey collaboration on powerful (if short) closer The Performance Of My Life as a natural next step.

But she can do free-spirited just as well, as Wainwright’s joyous contribution Apartment demonstrates. With an infectious Latin swing, it takes Enrique Iglesias‘s Balamos and Madonna‘s La Isla Bonita and, with a sax parp here and a tinkle of flamenco guitar there, cuts a dash to a whole new level of perfection. She sounds as devil-may-care with the Manics’ inspired The Girl From Tiger Bay. But it’s Hawley’s After The Rain that gives her free rein to be subtle, her voice intimate over a recurring piano arpeggiation. She sounds less icon and more girl-next-door on this one; Hawley’s lyrics of regret and loss are paired with an exquisite arrangement that is more about growing than showing.

Behind the headline grabbing numbers lie subtler gems. As God Is My Witness, an Arnold collaboration with the resurgent David McAlmont, begins with a celestial synth that causes it to sound suspiciously like a tribute to Bette Midler‘s Wind Beneath My Wings before taking on an almost-Motown harmony over electronic drums. Nick Hodgson‘s I Love You Now mixes in a highly processed undercurrent of synths before giving way to Arnold’s lush orchestration. Even the relatively limp This Time, penned by Gary Barlow, and the forgettable Nice Men, from the pen of KT Tunstall, aren’t entirely without their plus points; the latter would be quite at home in Chicago.

Diamonds Are Forever, as the song said. Shirley Bassey is already as timeless, as an original interpreter of sweeping emotions. Unencumbered by instrumental skills or her own songwriting, she is what she is – an instantly recognisable voice. It’s all she need be.