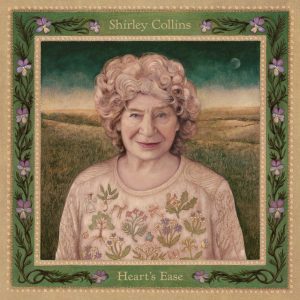 The word ‘legendary’ may be overused today, but it can be applied with complete confidence to Shirley Collins. One of the pillars of British folk music, she stands in that exalted position not just for her music, but through her entirely self-powered revival over the last seven years.

Having lost the use of her voice through a form of dysphonia in the late 1970s, Collins reclaimed the ability to sing in 2014. Since then she has set about making up for lost time, making as much music as possible while moving determinedly through her ninth decade. Having returned to the long-playing format with 2016’s well-received Lodestar, she has blossomed in the live environment and cemented a strong relationship with her band. Now on Heart’s Ease she broadens her wings still further, drawing material from Britain and North America while operating out of her studio near Brighton.

There is a marine theme running through this work, its succession of tales brought to life in Collins’ softly compelling style. She is the most vivid of storytellers, reeling the listener in with songs such as Locked In Ice, a song written by her departed nephew Buz Collins. She sings the captivating tale of “a little grey ship on the Beaufort Sea”, and even listening to it on a hot summer’s day a cold frisson fills the air. “Where the ice goes, I go”. The Christmas Song is frosty too, but with a warm heart as Collins bids her listeners a joyful new year in wonderfully rounded tones.

These are songs for all seasons, deeply rooted in tradition and brought out by Collins like treasures kept lovingly under lock and key at a museum. They are dark at the edges but given out with a perceptible twinkle in the singer’s eye.

Their staying power is typified by Wondrous Love, a song Collins first recorded for the BBC in 1958. Only now do we hear how suited it is to the lower vocal range she has today. Tell Me True has darker shades applied, a woman asking after “my sweet William” who is then distraught to learn of his demise. “In every verse I will shed a tear, in every line hold sweet William dear”. Collins sings with ownership and affection, the bare accompaniment here particularly telling.

Elsewhere she teases the myriad shades from The Merry Golden Tree and the hymn-like Barbara Allen, a song first recorded in 1959. Now, with the Lodestar Band well established at her side, the tale benefits from their sublime craftsmanship and evocative phrasing. Other notable touches include Whitsun Dance, introduced by a harmonica, and the triple-time lilt of the instrumental Orange In Bloom, with Morris dancer bells.

The most striking utterance is saved for last. Crowlink is a portrait of one of Collins’ favourite English beauty spots, one of the Seven Sisters where the South Downs meet the sea. Though it brings back Locked In Ice in its lyrical content, it has the broad brush of field recordings made on location by Matthew Shaw, who adds sensitively voiced electronics as Jon Hopkins might have done for King Creosote. Intimacy is replaced by expanse, and Collins’ voice appears as an apparition. It is a poignant epilogue, an out of body experience that serves a pointer for a potential next artistic move.

The beautiful cover adorning Heart’s Ease tells you much of what you need to know about this record. The voice of Shirley Collins is blossoming again, delivering its compelling stories with the urgency of a singer who simply had to make this record. Collins is a musical key worker, her songs compelling at every turn.