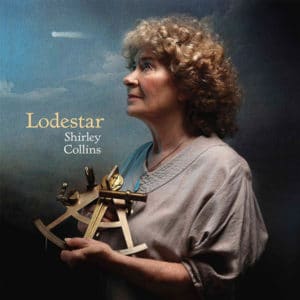 “Repent, repent sweet England, for dreadful days draw near”. These apocalyptic, portentous words may date back to the 16th century, but they could hardly seem more apposite for these unpredictable and unsettling times. The song implores the people of England to look inward and focus more on spiritual concerns. Whilst this might not seem like the most contemporary of responses, the country could certainly benefit from a period of reflection and an examination on how its deep divisions might be bridged.

Painfully reflective of her modus operandi of collecting old folk ballads (both well known and neglected), it’s perhaps apt that Shirley Collins now herself possesses a rediscovered voice. Diagnosed with dysphonia following the end of her marriage to Ashley Hutchings (Fairport Convention, Steeleye Span), Collins was left unable to sing; Lodestar is her first album in 38 years. Returning to recording (and live performance) after such a long period away would be an event for any artist, but Collins is a singer whose presence through influence has spread far and wide during her absence. 2014’s Shirley Inspired concert and recording emphasised her importance to a new generation of song collectors and performers (including her friend David Tibet of Current 93, Alasdair Roberts and Sam Lee).

All of these musicians have, in their own distinctive ways, shared Collins’ predilection for drawing out the weirdness and darkness in traditional song. If anything, this aspect of her music is greatly heightened here by the deepening of her voice. This imbues the songs with vividness and experience, somehow at once both robust and vulnerable. By celebrating both the strengths and weaknesses of this remarkable instrument, Lodestar feels entirely free from any form of burden or pressure. Collins possesses the sort of voice that compels the listener to focus, perhaps precisely because of her rejection of any kind of extraneous adornment. With the vocal takes recorded at Collins’ home, Collins seems at her most relaxed, able to inhabit each song completely, focusing relentlessly on clarity of communication and respect for the melodies. The music on Lodestar is all about the song, rather than about Collins’ musical personality.

This does not mean that Collins does not bring anything individual or creative to this world. In part through her highlighting of bleak and melancholy narratives, but also in her choice of musical collaborators, Collins captures a hinterland between tradition and vanguard. Oysterband’s Ian Kearey serves as producer and musical director, and Coil’s Ossian Brown and Stephen Thrower also play key roles in the sound and the arrangements. Brown adds the portentous, menacing hurdy gurdy that punctuates the album’s singular and compelling opening suite. Many of the arrangements feature subtle but highly effective nuances that greatly enhance the sense of atmosphere and foreboding. The scratchy strings on Banks Of Green Willow (sometimes reminiscent of Arthur Russell’s cello playing) heighten the feeling of inevitability, and the washes of cymbal rolls add to the dramatic tension.

These renditions do not try to soften the blow of some of the harshness, cruelty and unfortunate accidents of fate in this material. Audible birdsong from the garden cuts through the pauses in the music on Cruel Lincoln, initially feeling incongruous but eventually resulting in a striking contrast between the comfort and beauty of the natural world and the brutality of human behaviour. This juxtaposition is made starker by the inclusion of at least one moment of curious levity. The relatively sprightly Old Johnny Buckle celebrates absurdity and the inherent humour in language. If it initially feels a bit jarring in this context, not least in its brevity, it demonstrates that Collins has also retained a remarkable degree of verbal dexterity. It also provides a neat counterpoint to the spare, haunting quality of a ballad such as Washed Ashore. Whether stark and menacing, grief-laden or simply plain daft, Lodestar is a triumph of storytelling and sound.