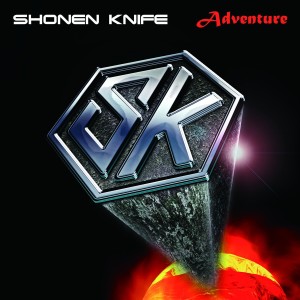 It’s been a long and strange road for Shonen Knife. Beginning in Osaka, Japan over 30 years ago, they paved their own way through the underground scene, were championed by alt-rock royalty in the ’90s, and refreshed things with line-up changes at the dawning of the new century. But the fundamental package remains pretty much the same as ever; a buoyant concoction of ’60s girl group pop, proto punk, motown and metal, delivered in a stripped-down power trio format.

All of these influences and more are in evidence on new album Adventure. It may tread familiar territory but that’s fine – this far into the game, they’re hardly going to deliver their jazz odyssey. Amongst its best moments, Rock n roll T Shirt sounds totally bad ass, like a sunnier L7. Likewise Tasmanian Devil definitely has devil horns in the air and ImI is pure Motörhead, albeit with a sweeter sounding Naoko singing rather than growling over it.

A famous habit of Shonen Knife is singing about food and other daft-as-a-brush subjects, such as cookies, cats, sushi and bicycles. The middle of the album nods to this by taking a culinary detour. Containing a rockabilly ode to wasabi with a chorus of “Hot, hot wasabi!, why is it so hot?” and Green Tangerine, a dreamy, subtly dark pop song about a ripening kabasu fruit that could easily be the soundtrack to a children’s show.

It’s never really clear if Shonen Knife are simply not taking themselves too seriously, or if these seemingly throwaway songs have a deeper meaning. The lyrics “it has just begun/ no one knows the future” would seem to indicate that there is more going on than is immediately apparent. Perhaps the obsession with songs about simple objects is part of their desire to return to a childlike sense of wonder. Also it may be given that some of the members, and indeed probably a lot of their fans, have families of their own by now, and these type of J-Pop bubblegum numbers will in the future form a new bond between punk parent and child.

Elsewhere on the album, opener Step Into The New World is a breezy punk pop ditty about changes and coming of age. Brimming with positivity, harmonies abound and there’s a simple melodic guitar solo that veers between being cutesy, if that’s possible for a guitar solo, and quirky with plenty of odd choices of notes thrown in. Dog Fight is more quirky jangly pop, complete with ‘bow wow wow’ backing vocals. Hawaii is similarly off kilter, a mid tempo sugary sweet wish for travel with twangy surf guitar backgrounds. “I want to go to Hawaii, Papaya, Mango, Pineapple.” Don’t we all, love.

Album closer Cotton Candy Clouds is pure Beatles-era psychedelia filtered through the Shonen Knife prism. Cascading harmonies and treated guitars over a laid-back groove lull the listener into relaxing, but being the band they are there is something approaching a rap in the middle section, before returning to the strawberry fields of Osaka. Over 30 years in the game, Shonen Knife have definitely carved their own adventure. If you find your day to be too grim, your rock to be too testosterone fuelled, or your pop too plastic, then this may be just the album for you.