Shonen Knife – Osaka Ramones: A Tribute To The Ramones 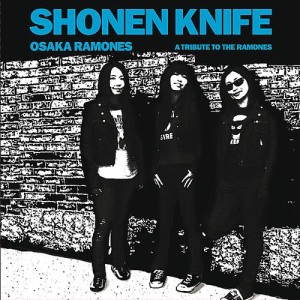 Japanese punk queens Shonen Knife celebrate their thirtieth anniversary this year. Most birthday parties see everyone reaching for the jelly and ice cream, but instead the band are celebrating with a no-holds-barred tribute album to one of their main influences: The Ramones.

Shonen Knife were founded in 1981 off the back of seeing The Ramones live and the New York rockers have always formed an integral part of the group’s evolution. This disc sees the band who once reduced Kurt Cobain “into a hysterical nine-year-old girl at a Beatles concert” tackling thirteen Ramones classics. This side project has been bubbling away for years, with Osaka Ramones almost taking on near alter-ego status for the various lineups of the band.

After thirty years Shonen Knife’s energy is still strong; these are lively, vibrant and kooky covers taking in classic tracks such as Blitzkrieg Bop, Sheena Is A Punk Rocker and Rock And Roll High School. The vocals are typically idiosyncratic but it’s all about the attitude and nothing is lost in translation.

Little is done to improve on the originals, but originality and reinterpretation are not the point – this disc knows the nature of its DNA and doesn’t even try to genetically modify itself. What the album lacks in originality it makes up for by simply being bloody good fun. “Does what is says on the tin” is a little hackneyed, but it sums everything up perfectly.

This isn’t really Shonen Knife’s triumph because you’re never left in any doubt about the virtues of the source material. The Ramones recorded some classic tracks and their punk DIY approach represented a heaven, where (to paraphrase Radiohead) anyone can play guitar.

As early as 1989, artists including Sonic Youth recorded their own Shonen Knife tribute album titled “Every Band Has A Shonen Knife Who Loves Them,” and judging from this project there’s no band loved more by Shonen Knife than The Ramones. After this long in the saddle, these Osaka mainstays can still show today’s young whippersnappers a thing or two. It might not break any new ground but there’ll be few albums this year as enjoyable as this one.