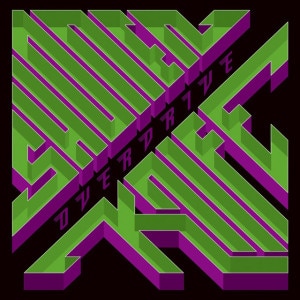 Moreover, the band has successfully weathered line-up changes, which have occurred as a result of everything from instrumental musical chairs (past and current members have moved from guitars to percussion and back) to death (drummer Mana Nishiura died in a car crash in 2005).

Now, they return with Overdrive, studio album number 19. In the context of Shonen Knife’s overall catalogue, you can’t expect or ask for much more with Overdrive: the band can write catchy pop songs, and ones that carry generally positive dispositions, in their sleep. But in the context of their very previous release, Pop Tune, an album whose emotional resonance showed a new side to Shonen Knife, and an album that two years removed simply remains one of the best Shonen Knife albums ever, Overdrive is somewhat of a letdown.

Considering their past 10 or so years, perhaps it’s fitting that the first song on Overdrive is called Bad Luck Song. But Shonen Knife are no longer as interested in melancholia as they were two years ago, so not only does Bad Luck Song talk about maintaining a positive perspective on life despite bad luck, but musically, it’s a sunny slice of grungy pop. Similarly, Dance To The Rock is escapist, fast-paced, and as instructionally commanding as the title suggests, recalling The Go Gos if they actually knew how to play their instruments.

But ultimately, it’s disappointing that after Pop Tune, Shonen Knife seem to be on autopilot, creating songs that could have appeared on any one of their previous records. Indeed, with songs such as Like A Cat, Shonen Knife are not only pandering to meme culture, but to longtime fans. Penultimate and unfortunately longest track on the album Robots From Hell is not instrumentally diverse enough to distract the listener from the song’s repetitive title refrain. And while the post-punk rush of Jet Shot is a fantastic closer for any band, and one that will most certainly sound great live, one gets the sense that Shonen Knife have done a lot of this before.

The best songs on Overdrive don’t necessarily try to convey anything lyrically complex or “important” beyond the creator’s whims but instead conjure up mental voodoo with instrumentation. Standout Black Crow is a plea for an animal of the same name not to wake its subject matter up from his or her dreams, and it certainly comes across like a teenager screaming “let me sleep!” to his or her parents. But musically, it’s sludgy, yet immaculately produced, sporting the perfect balance and mix of vocals, grungy lead guitars, Television-like rhythm guitars, and slow, but forceful percussion.

Elsewhere, odes to food and drink, like Ramen Rock and Green Tea, are not serious, and are all the better for it: the former is a chugging ode to post-show noodles that features arguably the album’s best (albeit shortest) guitar solo, while the latter is a scuzzy, bass-laden, surf rocking ode to green tea flavoured food. And Shopping, a song about, yes, shopping, is simply irresistible because it sports a riff that sounds like Tame Impala’s Elephant interpreted by ’70s metal.

Overall, if Pop Tune was appropriately titled because it exemplified what can be so great about pop music – the ability to make a listener laugh and cry, dance and sway, all at the same time – Overdrive is perhaps appropriately titled because Shonen Knife seem tired. Pop Tune was likely an emotionally exhausting album to write, record, and play live, and it seems their only choice was to go back to what they’ve been doing for 30 years, for better or for worse.