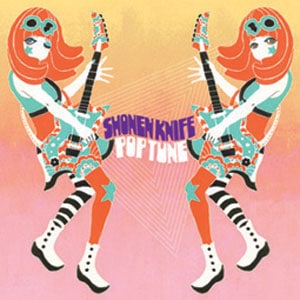 For an incredible 31 years Shonen Knife have been pumping out prototype riot grrrl, thrashing together early punk sounds with pop melodies. Along the way they’ve amassed a legion of influential fans, from Kurt Cobain to Thurston Moore. But despite the glowing endorsement and doggish persistence, they’ve never shaken off the ‘cult’ label – and on the face of it, with their 18th studio album, the Japanese three-piece aren’t nurturing ambitions to change this.

So why’ve they evaded the mainstream for so long? Maybe it’s their lyrics; there’s no getting away from the fact that a lot of them are just silly. Pop Tune is sung in English, so perhaps some are a little lost in translation. More likely, they’re just a bit bonkers. Take All You Can Eat, which sees Naoko Yamano (at 51 the only original member of the group, but frighteningly teenage-looking) chirruping about the merits of all you can eat buffets, offering pearls of wisdom such as “Don’t forget to take some vegetables” and “Chocolate fountain is the best”. Or Psychedelic Life, which sees Yamano reimaging herself as a hippy: “Burning incense, have some peppermint tea… Flower power”. Thankfully Pop Tune doesn’t come with a lyric book.

This is a good thing because, strip away the kitsch, written-by-five-year-olds lyrics, and Shonen Knife have been one of the most consistently brilliant pop acts of their generation(s). Last year they recorded a Ramones covers album, and you don’t have to listen to Pop Tune for too long to stumble across the band’s influence. So too for UK punk bands like The Buzzcocks and Jilted John, but they’ve spawned their own sound-alikes, and bands likes The Donnas, Helen Love, Horrorpops and even Lush owe them a thing or two.

For the uninitiated, the album’s namesake is as good an introduction to them as any, as over a fuzz of high energy, exploding lo-fi guitars Yamano grins: “When I feel the music, I get power…since you’re here think happy things”. The two sounds – the music and her voice – are so at odds with each other that it shouldn’t work. But it does, and the enthusiasm and energy is as bright as it was back in 1981.

Sunshine sees a sharp departure from normal service, with woozy layers of acoustic guitars forming the base for a sugary vocal that recalls Lauren Laverne; it’s fluttery and gentle, and wouldn’t have sounded out of place as a latter-day Kenickie single. But three decades of smiley lyrics about food and flowers do seem to be taking their toll, and there are occasional glimpses of a dark cloud hanging over Yamano. “Life is always very hard,” she admits in Move On, before offering a piece of advice to beat the blues: “When you feel some loneliness, try to remember a song you like…”

Pop Tune is in the top handful of records that Shonen Knife have released; a slight update on the rougher sound they pedalled in the first half of their career, but it still sounds DIY-enough to please the faithfuls. However, if the acoustic guitars and glimmers of cynicism creep their way through, who knows; maybe album number 19 will find fresh fans.