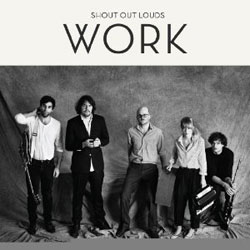 Calling your third album Work and posing for the cover artwork in a way that suggests complete disinterest does not fill the listener with huge amounts of confidence. Nor does the accompanying press release that talks of stripping away layers, keeping things simple and generally making it seem like a bit of a chore.

Three years since this Swedish quintet Shout Out Louds’ last album, it seems the cycle of album release followed by world tour followed by album release has sapped them of their mojo. Unfortunately this is reflected in much of Work.

Produced by Fleet Foxes and The Shins producer Phil Ek, the album starts promisingly with the bar room piano and bouncing melody of 1999 and the lovely jangle of Fall Hard, which utilises singer Adam Olenius’ supple falsetto to perfect effect. Single Walls is also a rather lovely affair, all slow-build drums, horn blasts and piano fills that would make Arcade Fire jealous. But whilst that band is able to harness a song’s energy and deftly ratchet up the tension, the Shout Out Louds seem happy to let the songs just meander along; proficient, yes, but all rather lacklustre.

Tracks like Paper Moon and Too Late Too Slow are hampered by the fact that too few risks have been taken with them. Every guitar line or off-kilter drum beat is expertly played, perfectly produced and works within the bigger picture, but at the same time it seems to suck any sense of drama out of the songs. The ragged joyfulness that imbued songs such as The Comeback, for example, has all but disappeared and in its place is a slightly dead-eyed proficiency.

Work is by no means a bad album; it’s just a disappointing one. For all their early promise, the band have made a record that reflects its title and monochrome artwork all too literally. It’s an album that’s been laboured over and people have spent time on it, but ultimately it all sounds too much like hard work.

Shout Out Louds MP3s or CDs

Shout Out Louds on Spotify