Sia – Music: Songs From And Inspired By The Motion Picture 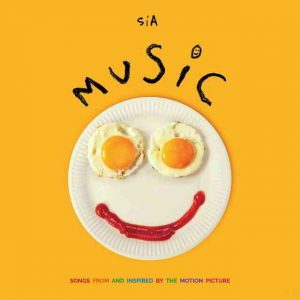 How things change. Only a few months ago, Sia was the Australian pop star best known for her wig, soundtracking the final scene of Six Feet Under and a series of collaborations with French DJ David Guetta.

In 2021 though, things are a bit more problematic. It’s impossible to discuss Sia’s ninth album without referring to the film that it acts as a soundtrack to. For the uninitiated, Music is a film that’s been mired in controversy ever since its announcement, from the casting of the neurotypical actor Maddie Ziegler as a mute autistic teenager, to the film’s depiction of restraint as a legitimate means to calm down meltdowns.

To her credit, Sia has apologised for and removed these scenes, but together with some pretty scathing reviews, it’s not been enough to distil the toxicity around the film. Whether the controversy will affect sales of the soundtrack remains to be seen, but taken on its own, Sia’s ninth album is not without its merits.

There are the usual star-studded list of guest credits. There are songs co-written by Dua Lipa, Greg Kurstin and Jack Antonoff, while Labrinth and regular collaborator Guetta also make appearances. There are certainly moments that sound like classic Sia. Tracks like Courage To Change, Floating Through Space and opening track Together are all the type of stirring, uplifting fare she’s made her name from.

There are some huge orchestral arrangements around Sia’s songs, especially on Lie To Me, and opening track Together (co-written with songwriter du jour Antonoff) strikes that tricky balance between being instantly catchy and irritatingly cheesy. It’s full of hooks, but you’re waiting for that ecstatic rush that songs like Chandelier or Titanium delivered in spades.

One of the problems is that many of the songs on Music feel rather formulaic. While there’s nothing intrinsically bad about the album, there’s no really special moment that stands out. Courage To Change features a clever interpretation of Pink‘s song Courage, but the lyrics feel a bit like a self-help manual put to music (“You’re not alone, standing together we can do anything” and so on).

Another problem with Music is, that’s when it’s not lapsing into formula, it feels a bit half-sketched. Oblivion, a duet with Labrinth, snakes and stalks around without ever really going anywhere, despite how well the two singers’ voices mesh together. There isn’t enough variety amongst the album’s 14 tracks to really make much of an impression.

Happily though, there are some bright spots – Dua Lipa continues her quest to rule the musical world by co-writing the excellent Saved My Life, while the orchestral ballad Lie To Me is ghostily atmospheric and builds up nicely to an impressive climax. Ultimately though, Music is a case of too much filler, too little killer, even when divorced from its controversial origins.