Sia – This Is Acting 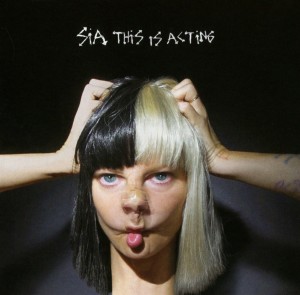 No one turns up the volume like Sia. Whereas a decade and a half ago she could be found singing slow burning late night songs for Zero 7, here she is right at the other end of the scale, fronting music that does all its work in block capitals.

This Is Acting – great title – really goes for the jugular. Its listeners simply HAVE to have a good time and a positive message, and Sia gives the impression her life depends on it. She could never be accused of sitting on the fence vocally, and with her producers Greg Kurstin and Jesse Shatkin, no opportunity to cut through the noise of 21st century life is taken for granted.

“I’m so powerful I don’t need batteries today!” she proclaims in Unstoppable. The electric charge from this song alone could power several cities, but it is the striking Alive that really leaves its mark. Co-written with Adele, it is a Marmite affair, with the same stamping bass drum that powered Rolling In The Deep. Here the production is much heavier, Sia’s vocal up close and personal. Every rasp of breath and micro-bead of emotional sweat is amplified off the scale as she hollers “I’M ALIVE” into the microphone. It is incredibly effective but at the same time disconcerting.

Full marks for bravery, then, but when returning to a more conventional pop song Sia has all the required attributes. She can do a mean key change or two, as the cavernous Broken Glass demonstrates, like an a-ha song brought forward a few decades. It is one of the best pieces of work here, though Sweet Design also stands out for a more natural approach, cleverly referencing Thong Song, and Footprints is a more meaningful ballad.

As the album progresses similarities between Sia’s execution and that of her power pop contemporaries are exposed. Her piercing vocals invite comparison with Rihanna, as does the production. Move Your Body whips up the grand melodrama that Lady Gaga achieved in Bad Romance. Shakira, too, is felt in some of the less coherent asides of House On Fire, where you think “what was she saying there?”

There are reasons behind this, for the whole album is made up of songs Sia wrote for other artists. Ultimately, those pitched to powerhouses such as Katy Perry and Beyoncé were rejected in favour of more successful submissions, some from Sia herself. Cheap Thrills was for Rihanna, as was Reaper, written ‘with’ Kanye West (the two didn’t meet).

In interviews Sia has admitted just how cheesy some of these songs are, and effectively This Is Acting is an experiment to see if she can make them work. It certainly shows off her talent for songwriting by numbers, even though the results are a little more like a compilation sung by the same artist.

The one song Sia wants to claim as her own is One Million Bullets, one of the few times she takes a step back and we can appreciate the lower range of her voice. It provides a rare moment of shade on an album that has an overwhelmingly positive message. The heavy treble mixing reflects the media on which it will be heard, so if you hear it bursting out of someone’s headphones on public transport you know exactly who to blame.

Ultimately, the lasting effect of This Is Acting is like taking on too much caffeine. It could never be accused of lacking honesty, commitment or power – some achievement given the songs were not all for her – but at times you long for Sia just to take a step back, to bring a little bit of that Zero 7 calm back into the equation. There are only so many times in 45 minutes you can clench your fists and reach for the sky without it beginning to feel a bit too calculated and contrived. But then, isn’t that what acting is all about?