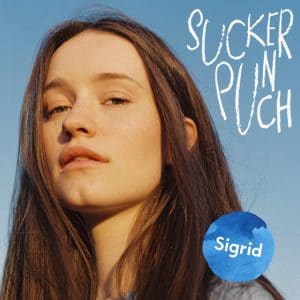 Since winning the BBC Music Sound of 2018 and releasing her Top 10 smash Strangers, there has been a slow-burning hype surrounding Sigrid. The 22-year-old from Bergen is cast as part Birdy, part Jess Glynne and part Rae Morris and the results on her debut album Sucker Punch are really rather exciting.

The title track opens proceedings and does just what it says on the tin. This has bona fide banger written all over it. Perfect pop synth is married in harmony to a soaring chorus with some quirky vocal touches. And then the thumping and filthy bassline underpinning the shimmering ’80s blueprint of Mine Right Now is glorious. If you thought lead single Strangers was epic, you’ll be surprised by how simply irresistible the opening two tracks are.

Don’t Feel Like Crying opens like Papa Don’t Preach and then glides into a beautiful and twinkling synth-pop anthem that Carly Rae Jepsen would be more than proud of. The gorgeous and urgent strings of the euphoric Sight Of You are a wonder to behold; a heartfelt and sincere tribute to her fans. Never Mine is a pulsating and ethereal gem evoking the magnificent Donna Lewis hit I Love You Always Forever, while Basic is anything but; what starts off as a tender and mid-tempo ballad exploring the early stages of infatuation builds into a tremendous synth-pop chorus with nah-nahs galore.

The folky ballad In Vain showcases just how powerful, layered and tender Sigrid’s voice is. The devastating Dynamite pitches her against Adele and not many could get away with that, yet Sigrid does with fervour and sangfroid. This is surely one of the album’s many highlights.

Sigrid’s attraction lies in the sense that she doesn’t seem to be manufactured, or any A&R suit’s toy. Original and talented, you get the impression she is really enjoying herself and not tied to someone else’s idea of what she should be. Indeed, this theme is explored on the outstanding bird-flipper Business Dinners, which has more than an echo of Ariana Grande at her most defiantly brilliant. Similarly, the sublime clapback Don’t Kill My Vibe tackles feeling stifled and sabotaged. It appears this lady is absolutely not for turning.

There are optimistic and empowering messages here. Our protagonist shuns wallowing and instead embraces positive thought when faced with a break-up. The narrative may be light and oft charted, but what an impressive and impassioned debut album from Sigrid Sucker Punch is. She and a world of adulation are unlikely to be Strangers for much longer.