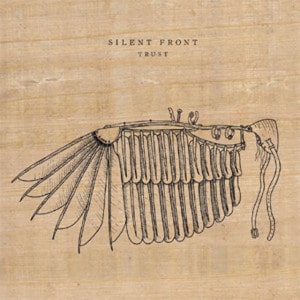 Listening to Silent Front’s second album all the way through is remarkably like seeing a band you’ve never heard of support your favourite artist. While it’s happening, it passes the time, and every now and then it even becomes quite enjoyable. You won’t remember any of the riffs or melodies by the time the headliners are halfway through their opening number, and the ropey support band sound means that they’re pretty hard to distinguish from each other anyway, but right in that moment they enter your ears, a vague thought blossoms that they might be quite good and you should check out their songs when you get home.

Except that this is their songs. And they had all the technology and time at their disposal to give them some immediacy and impact, but settled for half an hour of sound and fury, signifying not much. More sound than fury, too, as the vocals rarely deviate from a strangulated yelp, regardless of tempo, that never embraces tunefulness or real, roaring anger. There are melodies and riffs in there, but like in that soon-forgotten support slot, they find themselves buried in the mud like soldiers at the Somme.

So you power up your trusty metal detector and search through the quagmire, but even a thorough search reveals little treasure. At their best, they find a twisted, bluesy punk groove that brings to mind The Jesus Lizard or the sorely-missed Groop Dogdrill. There’s a heavy reliance on that waltz-y post-hardcore time signature, and the fossils of first-wave emo, Glassjaw, and Spy vs Spy can be retrieved if you dig deep. There’s a distinct feeling that their overriding ambition is to be produced by Steve Albini one day.

Fine influences, all. But when you cycle through most of them in a single song (finding time to pay tribute to Biffy Clyro‘s early work into the bargain), you need a little glue to make it work. Changing time or tempo is not just about where you start and where you finish, it’s the route you take to get there – whatever the genre. It’s Franz Ferdinand putting the brakes on in Take Me Out. It’s Iron Maiden finally giving us the main riff back in Phantom Of The Opera. It’s Keyser Soze losing his limp. But Silent Front lurch from one to the other too suddenly, too clunkily, too often, so that the effect is both disorientating and wearying.

That’s not to say they can’t play. They’re a seriously tight act, and can nail complex grooves that would flummox many a greater band. And dotted throughout the album are moments that show signs of promise – the half-time riff in Bracken is the first real head-nodder, the relentless 5-in-a-bar stomp of closer Veil gradually pins you to the wall with disarming force, and the build up to nothing in More Is Less plays charmingly with the audience’s expectations. But then a track like the ponderous Confiance comes along, playing dangerously with their patience; soporific where it means to be hypnotic.

It feels as though Silent Front’s underground status – and undoubted live ability – has perhaps given them a free pass for a little too long. In the flesh, in that noisy underground room, they can build up enough credit with the audience to overcome any lingering doubts that the songs might not quite be up to scratch. But in the cold light of vinyl, the shortcomings are laid bare, and Silent Front will have to take a giant creative leap forward if they’re to deserve to move that one step up on the bill.