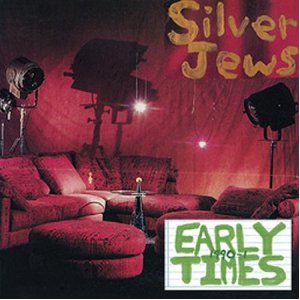 Although probably not the most important event of 1989, it was this year that influential slackers Steven Malkmus and David Berman kindly interrupted their lethargy in order to create a band, which they called Silver Jews.

Often misconstrued as a mere Pavement/Malkmus side project, the since disbanded group were underrated and seemed to lurk in the shadow of Pavement’s success, despite many acclaimed, excellent albums throughout a reasonably long career. Sadly, Early Times is unlikely to garner any further praise. A collection of very early recordings, with songs that would eventually appear on their first two EPs, the compilation is ramshackle to the point of derelict, at best vaguely interesting and at worst borderline unlistenable. Yet the early signs of greatness are just about in place… in places.

With out of time drumming, constant and probably unintentional distortion and half-baked songs, Early Times is clearly one for the Malkmus/Bermann connoisseur and lo-fi purist, a study into the origins of two notable careers soon to take off, but little more. And in this sense the album works. September 1999 and Bar Scene From Star Wars are anthemic and atmospheric respectively; reasonably good tracks but with production values that bring about the occasional wince.

Aside from these and a few others, Jackson Nightz and Canada, for example, the collection makes for a pretty tricky, unrewarding listen; the interruptions, snippets of chatter, abysmal drumming and many other irritating features severely negate the record. The main issue here is that positive aspects are few and far between. I Love The Rights is an insistent, driven track which, despite many flaws in its recording, shows a band with a decent grasp of guitar playing and songcraft, despite this grasp being in its infancy.

Negatives outweigh positives, and nowhere is this more evident than in The Walnut Faction. Whiney spoken word vocals and scratchy, directionless guitar combine to make a track that verges on excruciating. Punk’s DIY, no pretensions attitude is certainly alive and well here, but on this track it outstays its welcome. Similar messiness is prominent throughout the album, making the whole thing seem frustratingly pointless, unrepresentative and detrimental to the band’s legacy.

This record is essentially a minor curiosity, akin to the publication of the band members’ childhood drawings – occasionally interesting within context but unsatisfactory and fruitless in itself. Silver Jews and Pavement are shown in their formative years here; the slacker rock which the latter would make famous in the ’90s shown raw and unpolished, but the record feels like it should be displayed in a museum and not played on a stereo. Bootleg and demo collections are often hit or miss, varying from outstanding (Bob Dylan’s Bootleg series, Nirvana’s Incesticide) to poor (The Doors’ Essential Rarities). Early Days belongs firmly in the latter category; a confusion from start to finish.