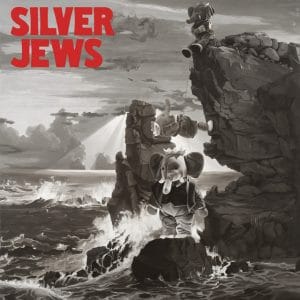 Their sixth and most accomplished release to date is bursting at the seams with more of their typically cerebral references, sardonic puns and metaphors, but where in the past this much-loved cult alt-country act have kept their offerings decidedly stripped down and lo-fi, this time they embrace a bigger, more expansive sound that is every bit as warm and inviting as the intriguing lyrics on display.

After 19 years of ever-changing line-ups, which has included appearances from Pavement‘s Stephen Malkmus and Bob Nastanovich, this album is performed by the Silver Jews formation that toured the world in 2005 and 2006, consisting of Berman and his wife Cassie, Tony Crow, Brian Kotzur, Peyton Pinkerton and William Tyler, and it is the sound of musicians who are totally at ease with each other, playing around confidently with their frontman’s beguiling melodies and coming up with music that is both pioneering and quite magical.

Each of the 12 tracks is understatedly rendered to perfection here, from shimmering opener What Is Not But Could Be If, to the playful pianos of Aloysius Bluegrass Drummer, My Pillow Is The Threshold’s dark and fuzzy guitars and crashing drums, rhythmic six-minute epic San Francisco BC and the glorious husband and wife harmonies of romantic ballad We Could Be Looking For The Same Thing – it’s dusty modern country at its best driven by Berman’s trademark gravely vocals.

And while often the record’s subject matter is serious, the choruses soar throughout, with the odd quip even thrown in here and there for good measure: “What’s with all the handsome grandsons in these rock band magazines/ What have they done with the fat ones, the bald and the goateed,” Berman laments on Strange Victory Strange Defeat following a sample from a Theodore Roosevelt speech in the early 1900s.

Admittedly it’s hard to work out initially where all of these intricate lyrical connections lead, but the fact that they are wrapped up in incredibly catchy songs that keep you coming back for more makes Lookout Mountain, Lookout Sea paradoxically Silver Jews’ most complex and most accessible work to date. Better yet, it improves with each listen, as more and more nuances and links are revealed. If Berman does decide to swap songs for prose full-time, then poetry’s gain will be music’s loss for sure.