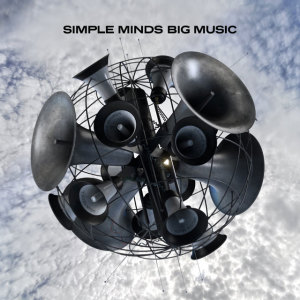 The path to redemption continues apace for Simple Minds. The band are very much out of the period where they were regarded as a substitute for U2 and now find themselves in an era where their influence is not only admitted but wilfully encouraged. The transformation has been aided considerably by the reissue two years back of their first five albums, regenerating them as a once-edgy band capable of turning the heads of LCD Soundsystem and The Killers – and ensuring Jim Kerr’s musical legacy may even eclipse that of Bono’s.

Kerr is a man reborn at the front of the band, and Big Music – a bold title – finds him exploring familiar lyrical themes. These take place within the band’s signature, power pop sound, with the reverb back at manageable levels. “I’m an exile searching for the right place,” he reveals in Human, but the truth is there is a renewed conviction to the Simple Minds sound.

It is all very clean and processed – occasionally too glossy – but is essentially shorn of all the stadium trappings of the middle part of the band’s career. Instead we look back to that early Simple Minds period, without ever threatening a re-hash of the highs of Empires And Dance. Big Music drifts in under the Balearic sun, sounding like a remix of Robert Miles’ mid-1990s hit Children, before planting its feet square on the floor to deliver 12 punchy songs.

Of these, the gritty bass line of the title track packs a sharp punch that suits the band perfectly, while the single Honest Town has a thought provoking poser to go with its moody outlook. “When the light settles down here in Honest Town, you’ll see”, sings Kerr, “there’s still something between you and me”.

In some places – Blood Diamonds especially – the synths well and truly take over, the band moving closer to the current electronic backdrop used by fellow revivalists OMD. This particular song finds a characteristically wistful quality in Kerr’s voice. “Once we were lovers,” he remembers, “diamonds to the end”. Let The Day Begin consciously looks back to the big late-’80s sound but then adds a serrated bass line and a massive drum track, seemingly hewn from inside a massive cave. Blindfolded and Midnight Walking are early examples of the band’s confident, ballsy approach – while only Concrete And Cherry Blossom falls a bit flat, with some awkward lyrical couplets.

Yet as Simple Minds look towards arenas rather than stadiums, to Honest Town rather than the City Of Light, Big Music sees them come out fighting with their best album in decades. Rather than appearing musically tired or bereft of ideas, they have real stomach for the fight, a resilience that looks set to see their star continue to shine.