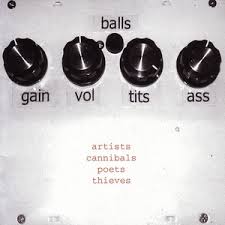 To help put into context what I’ve been listening to solidly for two weeks – namely Six By Seven’s fifth long-player – I toddled off to the Nottingham collective’s website. Therein was not the expected swathe of bullish predictions of finally breaking through into the mainstream, but sad news: the announcement that they are calling it a day after seven hard years on the unfashionable indie treadmill. For a small minority of us who care, this is sad news.

So the context is one of closure, and this review feels like penning an obituary. It’s also true therefore that a savage attack on this record would be akin to disrespecting the deceased, but thankfully there’s no need to worry – this is an album that’s as alive as any could be.

Indeed, far from sounding like the last desperate set of half-baked ideas from a once vital band (hello Oasis?) Artists Cannibals Poets Thieves is more like a debut album from a bunch of teenage upstarts: free from cynicism, fired with worldly wonder and choc full of ideas.

This is certainly a different outfit from that of 1998, when they first wowed us (via John Peel, naturally) with the utterly essential sprawling noise that was The Things We Make. Long since stripped down by a series of resignations from a five strong collective to a taut three piece featuring founding members Chris Olley, James Flower and Chris Davis, the music has simplified considerably. Gone are the soundscapes of old, and in their place we have a series of sharp basslines, swirling keyboards, cutting guitar lines and the passionate hollering of frontman Olley.

Opener All I Really Want From You Is Love is a perfect introduction to proceedings – a truly wonderfully distorted slab of indie rock, recalling early Jesus And Mary Chain in both its fuzz and, crucially, its wonderfully crafted tune. Next, Nowhere To Go But Home sounds like New Order if they’d emerged from Detroit in 1966. Tonight (I Wanna Make It Out) follows likewise with the best bassline Peter Hook never plucked.

Throughout, Six By Seven manage to sound so natural, so refreshing free of the flab and introspection that a band on its last legs would usually succumb to. And whilst the momentum is momentarily lost as the drum machine makes an appearance to fashion the Suicide-esque trawl of Stara Paris Rescued Me, it’s not long before Just Get It Down muscles things back on course with a whispered Olley diatribe perched on top of more raw cacophony, before we reach the bitter end via the Depeche Mode-on-smack You Know I Feel Alright Now.

Back in 1998 – LP 1, Track 1: Chris Olley delivered the memorable line “A quiet life, with my wife, is all I need for goodness sake. The things I make, they have no use, but they have the most beautiful shape”. Seven years and five superb albums later, with a sweet irony, there could be no more fitting epitaph.

Six By Seven MP3s or CDs

Six By Seven on Spotify