by Ben Devlin
published: 31 May 2019 in Album Reviews
Tweet 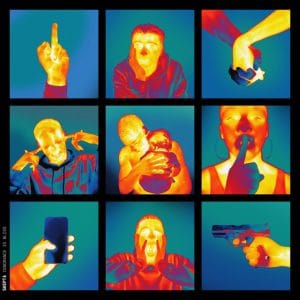 While Skepta‘s last album Konnichiwa was showered with acclaim from critics trying to catch the grime bandwagon, three years later it sounds more like a sign of promise than a masterwork in its own right. At various points a reliance on American collaborators – various members of A$AP Mob, Pharrell – dragged the record down and sacrificed its aesthetic consistency for star power. This is not a problem that affects Ignorance Is Bliss.

Speaking of which, 2017’s Vicious EP showed some worrying signs that Skepta had become a less interesting producer, but this record blows those concerns away. Love Me Not brings upbeat garage vibes and a surprisingly appropriate Sophie Ellis-Bextor sample, while the J-Hus-featuring What Do You Mean? is more reminiscent of early 2000s Dr Dre, showing a versatility that plays to all of his strengths. The most traditional grime track is the Boy Better Know posse cut Gangsta, where JME comes through with the best putdown to wannabe Gs.

The combined effect is that of an artist at the top of his game, with the newfound artistic freedom that Konnichiwa granted him but the energy of still having something to prove. It also confirms the 2010s grime revival as being more than a passing trend, and on this basis it’s stronger than ever.