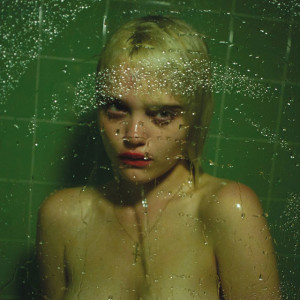 LA’s pop-noir darling Sky Ferreira, seemingly a remnant of the sex, drugs and rock’n’roll era in the ’80s, isn’t afraid to rub people the wrong way in her quest to be the most audacious, glamorous and fascinating rockstar since Kanye went, well Kanye.

That’s what she is essentially – a rockstar. She may not peddle the axe-chugging, low-slung bass, and cock-swagger flamboyance of Bon Jovi or Van Halen or AC/DC, but she’s definitely an enigma. There’s an aura around her, a casual blend of smoky disdain and snarling apathy; she’s not afraid of needles and she’s got refreshing views on femininity and the human body. In short, she’s the coolest, most calmly collected shaker-upper-of-order this ruddy century.

And she’s only 21. Call us jealous, but that seems unfair.

Her noises don’t weaken that claim either. For a woman thrust into blinding limelight, she’s managed to craft an invigoratingly un-pop/anti-Top 40 sound and retain sonic integrity; there doesn’t appear to be any compromise in calibre or style. It’s not inherently alienating or abrasive, but it also doesn’t bend to the whims of the masses or appeal to lowest common denominator. It boils down to a kind of new wave-cum-lo-fi rock from the ’80s. All Marlboro-breathed and hatchet-lunged, scratching her gaspy, rasping lyrics of sex and love, she simmers above the dulcet grind of guitar villainy.

Shrouded in shoegazer FX and droning reverb, the sonic tentacles that wrap around her magnetic vox are equally impressive – this isn’t the kind of record that slaps Sky at the front of the album to eschew all forms of harmony or rhythm; the bass, synths, drums and guitars have equal standing. It’s more a band record than a solo one. It creates an intriguing dichotomy, and ensures that her debut LP, Night Time, My Time, is a record worth immense chunks of your time. Those that dismiss her as a Lohanian hedonist or a flaccid industry mannequin couldn’t be wronger – she proves that she’s got depth beyond her years and an immeasurable dollop of talent.

Tracks like the already released You’re Not The One, with tinny six-stringer scrapes and glossy metallic beats, is rammed with sun-snogged melodies. It’s a rigid middle-finger anthem poised for a John Hughes film; for all her antics and naysayers and fan legions, she’s less Bieber/Gaga/Cyrus, and way more akin to Summer Camp. Ain’t Your Right, with its The Naked And Famous psych-coos and swarms of pedalboard guitar torture, is again a stiff wad of spittle, a smooth riot-pop belter. Omanko (the ‘unmentionable’ word for female genitalia in Japanese) ramps up the rock portion of her sound, replete as it is with whirring chords and distorted drones; it’s a blistering hurricane of moany-groany Japanophilisms: “Reading Japanese comics/ And fucking Japanese omanko/ The Japanese Jesus/ Oh Japanese Jesus come on…”

She gets tender too though. There’s a mellow side to the spiky-skinned Ferreira. The title track is a brooding gothtronica ditty; swooning in a delirium between hypnagogia and hallucinogenic toxins, she ably conveys the essence of night time. Boys is subdued also, though owns heady optimism – a rare feature in the gloomy nu-grunge annals of Ferreira. Boys isn’t a ballad in any way, but there’s a relaxed air to it as opposed to the clammed-up anxiety and sourness of other cuts.

Ferreira could’ve easily succumbed to hype and pressure from dozens of sources during the creation of Night Time, My Time. Fortunately, this is a strident, individual-sounding record that, while it possesses oodles of retro nods, also pushes forward with its brazen alt. pop. She’s a reclusive, reticent rockstar – more so than the titans of yore anyway – that thrives within a band environment. Without the organic, natural instrumentation, her appeal would diffuse. Fortunately, she’s plonked herself where she excels, and the result is a debut full-length that energises, empathises and excites with every step of the way. If she’s the herald of pop in the future, we should be getting blimmin’ excited.