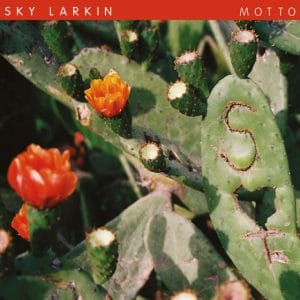 “I know there’s potential” was how Katie Harkin introduced her band’s second album Kaleide, around three years ago. And it’s that ‘p-word’ that seems to have defined Sky Larkin over their career so far – so much promise, some inspired bursts of genius, but lacking that certain something which could propel them to the next level.

Motto, however, is where Sky Larkin undoubtedly deliver on that potential. Whether Harkin’s long stint as a touring member of Wild Beasts has refreshed her and given her a new perspective, or whether the revamp of the band’s line-up into a four-piece has given them a different dynamic, Motto races out of the blocks right from the off, and refuses to let up.

Motto isn’t particularly different, on the surface at least, from Kaleide and its predecessor The Golden Spike, but there’s a new sense of urgency and vitality on display now. The old reference points still remain – the intensity of the likes of Sonic Youth or Sleater-Kinney, together with the delirious hyperactivity of Los Campesinos!, but with an added focus this time round that pays added dividends.

There’s also a depth that only really reveals itself after a few listens. Take Loom, for instance – on the surface, it’s an upbeat jangly anthem with a naggingly catchy refrain. It’s only on repeated listens that you realise that Harkin’s singing about bereavement, and that chorus of “Loom, loom, you’re always in the room”. Together with references to “ghouls” and “relics in brine”, suddenly gains a poignant new meaning.

Motto is the sort of record that produces a favourite new song on each listen. The wonderful Newsworthy could be many people’s first repeated track – a blistering, breathless number with Harkin in fine voice as she cries that “the cacophony’s coming for me” before pleading “suckerpunch me with something newsworthy”. The title track is another highpoint, a rallying cry against empty sloganeering, with the killer line of “If I had a motto I would tell you now/ From the catchphrase of a cash cow”.

Memorable lyrical couplets like that are scattered throughout the album – take the opening line of Treasury: “as long as I have my memories, I will keep them in a treasury” or Overgrown, which portentously begins with “in the hills above Bradford, there was a horrid accident”. It’s married to some of the most incendiary guitar playing you’ll hear all year, whether it be the crunchy The Loyal Beat, or the astonishing Italics, which is powered along on an almighty riff before collapsing into something approaching controlled chaos in the mid-section.

In fact, there’s not a bad track to be found on Motto. Perhaps, as the album progresses into its second half, songs like Tarn and Frozen Summer seem a bit more meandering than the more immediate first half, but they reveal their more subtle charms over repeated listens. We knew Sky Larkin had potential. It’s been more than followed up on with Motto, surely one of the best albums of the year.