by Talia Soghomonian
published: 10 May 2010 in Album Reviews
Tweet 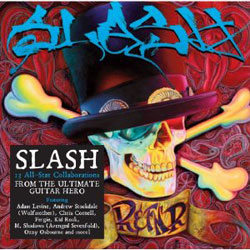 Apart from the inevitable and unnecessary Chinese Democracy comparisons, Slash is already getting some flak from diehard fans. How could he invite Maroon 5‘s Adam Levine or Fergie to appear on his new solo album?

But this is a guy who has performed with countless artists out of his genre including Michael Jackson and Stevie Wonder. He is not ashamed to call himself a “music whore”.

The top hat-wearing guitar hero has gingerly handpicked a diverse palette of vocalists to accompany each of the 16 tracks and contribute to the lyrics, while he takes care of the riffs. Written mostly during the last Velvet Revolver tour, Slash offers a mix of rock, blues, metal and even pop with a little help from his friends. While his guitar gently cries its iconic wail, Nine Inch Nails drummer Josh Freese and ex-Jane’s Addiction bassist Chris Chaney take care of the rhythm section. Yet the iconoclastic guitarist is careful to never upstage his guests.

On their very first north American tour, back in 1987, Guns N’ Roses opened for The Cult, and here is Ian Astbury kicking off Slash’s album with Ghost. It’s a classic rock number, an ode to their (g)olden days, especially when the signature dual guitar with former Roses member Izzy Stradlin kicks in. This is R & F’n R, man, and it is fun and unadulterated. But rock is also about atmosphere, provided on Crucify The Dead. This is pure Ozzy, from the poignancy of the lyrics and vocal interpretation to the discrete airs of Black Sabbath that wafts through like a ghost.

Rock legends abound – the ubiquitous Iggy Pop closes the album with We’re All Gonna Die – but Slash is smart enough to cater to every generation of fans and celeb friends alike. Which may explain his choice of Fergie. After her live rendition of the Roses classic Sweet Child O’ Min, the world discovered a rock chick disguised as a Black Eyed Peas member. She’s got the attitude and energy of a younger Pat Benatar and a voice well suited to rock, and Beautiful Dangerous offers a look at her more perverse side.

Perhaps the most surprising collaboration is with Levine. Even if the tune is not Maroon 5, Levine’s instantly recognisable voice inevitably brings his band’s sensitivity to it. Clearly Slash has chosen these songs with particular people in mind, much like I Hold On with Kid Rock.

Promise generates more interest as it features Chris Cornell, one of the greatest voices in rock. This melancholic rock ballad is one of a couple on the album, alongside the heavy Back From Cali, one of the two tracks (the other is Starlight) sung by Myles Kennedy. The Alter Bridge vocalist, slated to tour with Slash, apparently replaced Jack White; he didn’t want to sing, but rather just play drums or guitar. Similar conditions were also set by Foo Fighters‘ Dave Grohl.

The killer tune Watch This, featuring Grohl and ex-Roses member Duff McKagan, ended up being a proggy instrumental. Grohl’s dynamic drumming pumps as much power as a zillion drumming bunnies running on Duracell, all in less than an unbelievable four minutes.

Lemmy Kilmister both sings and plays distorted bass on Doctor Alibi, and his lyrics pretty much sum up his life, Slash’s and every other rocker’s. Doctor Alibi is a sort of Dr Jekyll and Mr Hyde for hard livin’ rock stars. One tells him that he’ll die if he keeps up his lifestyle, while the other reassures him that living it up is good for you, ridding the rocker of any shred of guilt about sex, drugs and rock ‘n’ roll, three themes that the Motörhead frontman continues to explore 30 years on even on other people’s music.

Elsewhere, Slash revisits his favourite musical epoch on the brash By The Sword, featuring Wolfmother‘s Andrew Stockdale, a serious rival for the guitarist in the hair department. It’s indicative of how the entire album was made: Slash sends someone a track, they write the lyrics, they meet and record, and it’s in the box. Yet there is no trace of self-indulgence here, no Chinese Democracy level of faux-perfectionism and certainly no Axl Rose-type promises of musical superiority.