Sleaford Mods – All That Glue

by Chris White
published: 16 May 2020 in Album Reviews
Tweet 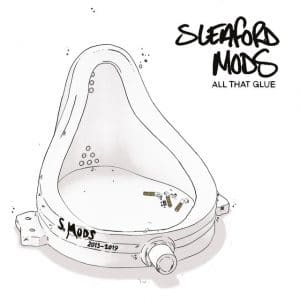 Encountered for the first time, Sleaford Mods can be a slightly daunting, impenetrable experience. The Nottingham-based duo’s defiantly unpolished combination of frenetic, rudimentary beats, scabrous punk and vitriolic, expletive-laden lyrics – spat out by singer Jason Williamson in a broad East Midlands accent – could never be described as easy listening: and this is coming from a reviewer born and brought up down the road from the Mods in Derby.

Formed back in 2009, when Williamson, after years as a session musician and aspiring singer-songwriter, was already approaching 40, Sleaford Mods have gradually evolved their sound through the years from the distinctive basic ingredients present at the very beginning. Williamson started the band with Simon Parfrement, who he worked with alongside a studio engineer at Rubber Biscuit Studio in Nottingham on their first four albums. Parfrement passed on the music production to Andrew Fearn after the release of the 2012 album Wank, although he continues to play an important role in the band as their photographer and media producer. Their two most recent releases – 2017’s English Tapas and last year’s Eton Alive – showed Fearn’s growing sophistication musically, with Williamson’s sardonic, me against the modern world diatribes now delivered with a little more restraint.

New compilation All That Glue, a collection of songs spanning the last seven years of the band’s career, comprises crowd pleasers, B sides, unheard tracks and rarities, and it’s as good an introduction as any to Sleaford Mods’ peculiar charms. It sets out the their stall from the start with McFlurry and Fizzy, two key tracks from their breakthrough Austerity Dogs record, which instantly encapsulate Williamson’s trademark anti-establishment anger. The beats are as simple and raw as the lyrics, with “I work my dreams off for two bits of ravioli / And a warm bottle of Smirnoff / Under a manager that doesn’t have a f**kin’ clue,” neatly summing up the singer’s sneering contempt for the banalities of thwarted ambition.

These earlier songs are arguably Sleaford Mods’ finest moments, with their DIY charm making them feel especially authentic. Whether he’s pillorying the extremes of capitalism on Rich List, skewering a self-satisfied non-entity on Jolly Fucker or – best of all – capturing the soulless experience of signing on (the previously unreleased Jobseeker), Williamson combines rage, humour and absurdity with a deftness that belies the directness of his delivery. Jewels of observational detail within the scattergun tirades range from the “French fancies/Mr Kipling acid dances” and “arrogant cunts/Ian Beale tight trunks” of Jolly Fucker to “I woke up with shit in my shoe/outside the Polish off-licence,” from Tied Up In Nottz, with song titles like Routine Dean and Blog Maggot perfectly reflecting their creator’s dystopian view.

The later tracks on the compilation don’t quite have the same impact. Of course, as their success grew and the opportunities to work in bigger budget studios appeared, it was almost inevitable that Sleaford Mods would lose some of their ramshackle character. Be that as it may, the smoother, funkier riffs and (relatively) controlled vocals of Tarantula Deadly Cargo, B.H.S or When You Come Up To Me do lack the furious immediacy of their previous work, although some may welcome the greater variety and slickness.

As with John Cooper Clarke, Ian Dury and The Streets, Sleaford Mods capture the nuances of contemporary urban British working class life and all its iniquities with rare accuracy. Their seething, resolutely unfiltered snapshots of a society in decay are something of an acquired taste, for sure, but there’s no-one else out there quite like them.