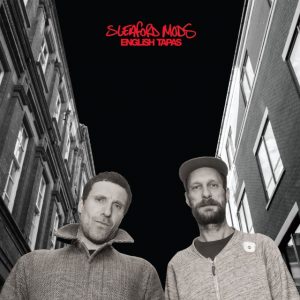 It seems unlikely that Sleaford Mods will ever change their basic format. At its core it’s a simple one: Jason Williamson shouting his social commentary over Andrew Fearn’s unpretentious beats. They speak from a place that’s otherwise unrepresented in contemporary music: solidly English, but not in a UKIP way; political but cynical; firmly working class, with a well balanced combination of sympathy and mockery for their firmly working class subject matter; and not above dropping in the odd fart joke. The title of their new record illustrates their stance. English Tapas is apparently an item seen on a pub menu, consisting of half a scotch egg, some chips, a pickle and a pork pie.

There’s unintentional comedy in such an assembly of bar snacks, but there’s also a sadness in how strangely creative yet wholly unimaginative that plateful is. A similar sadness permeates the album. In their previous work Sleaford Mods have been pissed off, appalled, snide, sometimes aggressive, but Williamson has never been mournful in quite the same way that he is here, nor so disappointed in what he sees around him, whether it’s politicians, musicians or just ordinary people.

This comes through not only in the lyrics but in their delivery. Williamson has occasionally deviated from his usual half-rapping half-speaking style into actual singing, but never to the degree that he does here. Time Sands is as downbeat as anything Sleaford Mods have produced before and it’s largely due to the sombre tone of his singing.

Closing track I Feel So Wrong is the real revelation in this respect, though. It’s built on a simple and spacious beat that circles a straightforward piano part, and apart from shouting out the title as a refrain, Williamson properly sings the whole thing. He sings from the perspective of a man walking home from a night out, somewhat worse for wear and hoping that it doesn’t start raining, and it’s the only Sleaford Mods songs to date that could potentially be described as pretty. It’s the best track here for sure, and if Williamson and Fearn ever do want to change their basic format they should take it as their starting point.

But for now, the strongest affinities remain with post-punk and hip-hop. Williamson has been compared to Mark E Smith more than a few times, and the aforementioned Time Sands has more than a hint of The Fall about it, while Moptop is what Joy Division would have sounded like if Ian Curtis had been an extrovert. The cadences of bass-heavy Cuddly have something of Roots Manuva to them; and the coked-up rambling of Snout takes cues from grime, but inverts its braggadocio, twisting its bravado from swagger to pity.

Several tracks are about being out on the piss and the hollow felling that state can often result in. The protagonist of Army Nights fights through that emptiness in military style, working out by day and downing vodka shots by night, in an endless cycle of grim machismo and shit club nights. Drayton Manored is centred on the kind of stoner aphorism typical of Sleaford Mods. “Trip to Spar is like a trip to Mars,” Williamson sings, as he contemplates going out into the night in search of a few more cans.

But the mood of English Tapas is best summed up by the hook from BHS: “We’re going down like BHS while the able-bodied vultures monitor and pick at us.” We are at the mercy of the powerful and influential, so why not down vodka and eat crap bar snacks? At least we have Sleaford Mods to slyly observe and comment on our sorry condition.