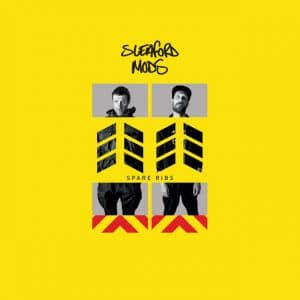 We are living extraordinary times, one of the most devastating and catastrophic years in our country’s history has just passed, and right now it seems as if nothing much is going to change and yet everything has changed. Years of undervaluing those that keep this country running, underfunding the NHS, and treating people as commodities has led to a disastrous social car crash in the wake of governmental incompetence and covid, and it is going to take the investigators years to pick the bones out of it. Sleaford Mods‘ latest album takes all this in and suggests that most of us are seen as superfluous and expendable by those who govern our lives. We are the spare ribs.

In times of political strife, public unease and cultural schism tends to be the spark that ignites musical resistance’ blues, rock ‘n roll, rave, hip hop and punk all have their roots in opposition, agitation and abandon. Of the voices in music cutting through the bullshit at the moment, Sleaford Mods’ Jason Williamson’s observations are so pin sharp, albeit wrapped up in his own unique lyricism, that it’s almost a civic responsibility to listen to him.

Recorded over the course of three weeks during lockdown, Spare Ribs finds Williamson and Andrew Fearn casting their gaze over the state of a nation. Sonically it’s not a massive step forward from the Sleaford Mods of previous albums. Stripped back tracks, smart beats, punchy bass, and Williamson’s dextrous barked delivery are all in place, and it seems that the band are in their dis/comfort zone.

Kicking off with the short intro A New Brick, Williamson introduces the album as a kind of circus barker as he talks of being “Tory tired and fucked by minds so small” before things get truly rolling with Short Cummings, a bass driven attack on Boris Johnson’s former handler Dominic Cummings. It says something about how quickly things can change in politics that a song written a few months ago as a prediction now sounds a little dated with lyrics like “he’s going to mess himself so much, but it’s all gonna come down hard”. From there, Williamson focuses on class tourism and empty political rhetoric with the thunderous Nudge It. It’s here that the band’s sound expands a little, with the addition of a vocal from Amy Taylor of Amyl And The Sniffers, but as usual, Sleaford Mods hit their target straight between the eyes, particularly when they hit the refrain of “you’re stood outside a high rise trying to act like a gangster”.

Perhaps the album’s most effective moment comes in the shape of Out There, a truly claustrophobic exploration of racism, panic in the supermarkets, conspiracy theory, and division. “I want to tell the bloke that’s drinking near the shop that it ain’t the foreigners, but he don’t care,” sneers Williamson over a sinister beat and bassy thrum shot through with the same funky menace as Low Rider. Running his hands through his hair, he takes in the queues outside the clinic, people talking shit on the TV show Mandy, no cars on the street. And he’s in fine form. “I don’t want to talk to you cunt, you boring fucking cunt,” he spits, as he goes on to describe the effects of the actions of the government (children crying into their cereal, lockdown stress) and queuing up a take on the UK’s leaving of the European Union. “Lets get Brexit fucked by a horse’s penis” is perhaps a slogan that might gain some momentum before too long. That the song starts with a cough seems darkly appropriate.

Recent single Mork And Mindy is a particular highlight. With its warped electro feel, it sums up life on the estates in 1982. There might not be much in the way of beauty to be found, with the dead dandelions outside, the curtain twitching, divorcing couples, and the scent of old cigars and damp patches on the ceiling, but somehow it feels weirdly nostalgic. The addition of Billynomates on vocals adds another aspect to the Mods sound, giving their taut exploration of suburban life a dose of soul.
There’s an element of nostalgia to closing track Fishcakes too. With a bassline that sounds like a repurposing of Smells Like Teen Spirit, Williamson conjures up images of youth, before delivering the line “When it mattered, and it always did, at least we lived”. The opportunity to truly live has been denied to us for so long now, but it’s important that we start to live again, because nostalgia is not enough. Anger might be the energy we need.