by David Welsh
published: 17 May 2010 in Album Reviews
Tweet 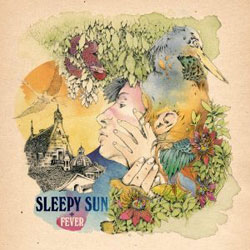 Californian six-piece Sleepy Sun are a product of their home state: all sunshine through a smoggy haze, their sound is one that reflects the Golden State’s geographical and historical tapestries, rich with contrasts, “dead blues shaken alive, razor sharp and ramblin'”; a synopsis tempting enough, surely, to whet even the most reluctant of appetites.

Fever arrives almost exactly a year after its debut predecessor Embrace – an album “crammed with ideas, influences, and phenomenal musicianship” – and is promised to be the palace at the end of Embrace’s delicately cultivated path. So does the expectancy spoil the party? Perish the thought.

While quickly establishing an ether of positive vibes, smoky imagery and fleet-fingered acts of bravery across the fret board, nine-track Fever proudly defies any stoner rock pigeonholing cast its way. First track Marina toys with an indulgent solo and resonating chords, but trades mainly on its timeless male-female harmonies and gorgeous gentle passages. Topped off with a tribal drumming section, it’s a heady, intoxicating and eclectic opening salvo.

And from there the album simply continues to unveil its virtues: Rigamaroo, a Wild West-evoking acoustic journey, sounds like the kind of enduring mini-masterpieces put together by Fleetwood Mac before they embraced years-long post-production processes; Wild Machines’ six minutes pass swiftly, its Band Of Horses-style tempo tampering and haunting, reverberating refrains warmly welcomed and quickly missed.

Fever then relocates to California’s tranquil retreats for a spell as Ooh Boy sets aside blues for folk in the most disarming and delicate way, its unplugged, unhurried tenderness further amplified by the droning, peaceful and lingering subsequent track Acid Love.

Not that such a sun-blushed approach marks the arrival of a second half that invites the listener to doze: Desert God, emerging from a timid, hungover progression, fulfils aforementioned promises to shake alive dead blues, its crashing, evocative soundscape lurching like an early-era Beck number and enriched considerably by lead singer Bret Constantino’s raw timbre.

Open Eyes, similarly, displays respectful deference to the principles of blues while still managing to kick them into something indefinably contemporary, the Constantino-Williams harmonies reminiscent of the dark romance so criminally overlooked on Fleeingnewyork‘s A OK album of some years past.

Fever’s nine tracks carry weight, rendering it an album appropriate for a band whose considerable abilities are coloured by a blues movement that stretches decades into the dusty past: Sleepy Sun treat blues the way Fleet Foxes handle traditional folk, and that can mean only one thing – an absolutely absorbing listening experience.