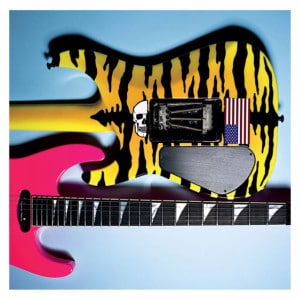 Sleigh Bells are a duo who are more than meets the ear. From their smart lyrics, always obscured by noise but dealing with topics ranging from femininity to youth to depression and suicide, to the statement that their early music made (that femininity and aggression weren’t mutually exclusive), they weren’t just some weird musical experiment from an intense cocaine high.

But while they may never match the pure excitement of 2010’s Treats, Sleigh Bells have evolved. Some of the poppier tracks on last year’s Reign Of Terror, from Crush to End Of The Line, hinted at a softer side. On this year’s unexpected Bitter Rivals, Alexis Krauss is in full on popstar mode. While on some of Bitter Rivals’ songs Krauss retains the fierceness that rendered Sleigh Bells such a dynamic pop band by combining her light, airy vocals with pure, unbridled emotion, at other times she sacrifices aggression for cutesiness.

Bitter Rivals starts strongly, with the opener and title track an extremely effective demonstration of the sort of track Sleigh Bells can surely do in their sleep by now. It’s catchy beyond the fact that it’s expected. As the album progresses, the concept of rivalry goes along perfectly with Sleigh Bells’ misleading cheerleader aesthetic, one that’s actually multi-layered, using the cheerleader as a metaphor for emotional support rather than taking what it is literally in the context of their album covers (feigned enthusiasm over a football team). Meanwhile, second track Sugarcane is more traditional Sleigh Bells; even if Krauss belts unusually high during the hook and the sweetly menacing refrain of “beware!”, its beat is essentially that of last year’s Comeback Kid.

On Minnie, however, the too-poppy hook distracts from something that’s otherwise blistering. “Minnie Minnie, go count your pennies / I’m sorry to say you don’t have many,” squeaks Krauss over a pop-punk guitar riff. Despite its heaviness, Minnie is simply fire to the fuel for those who claim Sleigh Bells to be unlistenable and annoying. The track also inexplicably slows down after every chorus, something that’s plodding rather than a welcome change of pace. In terms of aesthetics, Sleigh Bells essentially do one thing well with some variation: combine the cheerleader with the metalhead. They do it so well, however, that it’s basically what you want out of every Sleigh Bells release.

Some tracks have few redeeming qualities. Krauss’s whispered, yet R&B-influenced vocals on the horns-featuring Sing Like A Wire are noticeably out of place with the band’s usually chanty chorus, while the unoriginal and ’80s-inspired Tiger Kit sounds like Krauss covering The Go Go’s or really any song that appeared on the Fast Times at Ridgemont High soundtrack.

Yet if one song on the album works, despite the fact that it’s different from the only thing that Sleigh Bells seem to do well, it’s the candy-coated, synthy dance track Young Legends. The guitars here only surface during a chorus that showcases Krauss’s talent and ability to fuse R&B with dance. If Bitter Rivals was full of tracks like Young Legends, it perhaps would have found a common crowd with fans of Icona Pop’s I Love It.

Ultimately, Bitter Rivals is a mish-mosh of songs: some good, some of high quality though tempered by and succumbing to poppiness, and some that shouldn’t have made the final cut. It will be interesting to see where Sleigh Bells go next. Hopefully they either make a “comeback” record that sounds more like Treats or a full on pop record full of songs like Young Legends. If not, however, this once abrasive band will find its way into the musical safety of Top 40 Radio.