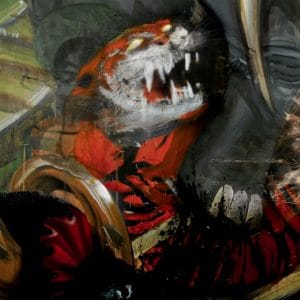 Sleigh Bells burst into musical flames in 2010 with their debut album Treats, creating a high-tension, gloriously processed brand of electro-punk. They arrived fully formed, and with killer singles in tow. But how does a band with such a distinct and identifiable stamp develop without losing what made them special in the first place?

With the release of their fourth studio album Jessica Rabbit, not much seems to have changed. At their very best, Sleigh Bells remain capable of making viscerally hair-raising tracks that could not be mistaken for anybody else. On standout tracks such as I Can’t Stand You Anymore, vocalist Alexis Krauss is on permanent high-register shout-singing mode, backed by an industrial, clattering production that blends serrated guitar lines with aggressive electroclash percussion. These tracks depict a band who have been backed into a corner and who have no choice but to come out swinging.

This record’s greatest shot at immortality is the single I Can Only Stare. It is the sort of melodically friendly earworm that customarily graces mainstream radio, but with the anxiety quotient turned up to a slightly uncomfortable level. Imagine, if you can, a Little Mix single produced by Crystal Castles. Sleigh Bells like to operate at their elastic limit, with the sort of emotional intensity under which any regular mortal would collapse. The result on the one hand is to create excellent standalone tracks, but a 45 minute album can become a struggle.

There is little variety in the pacing of Jessica Rabbit, and when the flavour is as strong as it so commonly is here, then the listener can begin to suffer from fatigue. There are almost no breathers from the intensity – out of the first 12 of the album’s 14 tracks, only Loyal For offers a moment of levity and suggested relaxation. It is moodier, relying on a sparser, echoey percussive backing, rather than the typical frenetic collision of beats and guitar. But the reduction in volume and anxiety notwithstanding, this is still a taut two minutes of music by most band’s standards. Genuine respite doesn’t come until the record’s penultimate track Hyper Dark, easily the least hyper of any of Jessica Rabbit’s tracks. It shows a genuinely gentle and sensitive side to Sleigh Bells, previously unexplored. Guitar parts step in and out politely, and Krauss’s vocals twinkle. More tracks that demonstrate this level of dexterity could have lent the album a more comfortable listening experience.

Sleigh Bells are at the fourth album stage of their career now, and know that there is an existing audience that is likely to remain loyal to them. Whilst they have ironed out a few of their earlier shortcomings, especially in relying on well-known samples to develop singles such as the Funkadelic rip on Rill Rill, they remain committed to the hyperactive, all-edges-frayed archetype that we have become so used to getting from them. For the loyal fans, this is what they come back for. For the more casual Sleigh Bells listener, this may prove one full-length album too many.