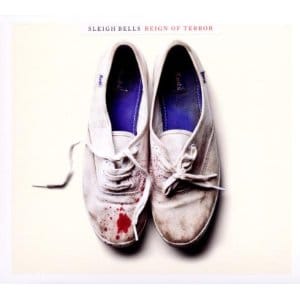 Back in 2009, Brooklyn-based noise pop duo Sleigh Bells did not so much ease their way into the indie scene as bash through with frenzied, explosive force. Their refreshingly exciting debut album Treats was released the following year to critical acclaim, with their raw and abrasive sound setting them apart from anything else around at the time. Even before Treats was released, the duo, comprised of songwriter and guitarist Derek E Miller and vocalist Alexis Krauss, were creating a huge buzz. They were booked to play Coachella a month before their debut album was released, with only a dozen shows under their belt.

Almost two years on from the release of Treats and little has changed. The crunching, boisterous pop that the duo made their name with has not been challenged by copycat acts, leaving them with just one dilemma: how to surpass the excellent Treats? Talking about the sound of their sophomore album Reign Of Terror, Miller said: “With Treats it was less clear to me whether Sleigh Bells was going to be a guitar band or if we were going to do more sample-heavy stuff. With this record I had to pick sides. The beats are still important to me, but the guitar won.”

Miller certainly appears to be true to his word on opening track, the suitably titled True Shred Guitar, which sees Krauss deliver an in-your-face vocal over Miller’s bullish, unpolished guitar riff. Krauss’ repeated shouts of “Push it, push it, push it” is reminiscent of Salt-N-Pepa’s signature song, highlighting the band’s affinity with hip-hop-inflected beats – something repeatedly evident on their debut album. The first proper single from Reign Of Terror, Comeback Kid, also rests on Miller’s grinding guitar, before Krauss’ softer vocal combines dreamily with the melodic chorus.

Promotional single Born To Lose captures the essence of Treats, with the stuttering beats and biting guitar sounds similar to those that made Sleigh Bells’ debut such a surprise hit. Krauss delivers another delicate vocal, providing a contradiction in sound that somehow manages to sound perfectly right. The squirming riff on Leader Of The Pack also treads in the shadow of Treats. Yet the shrill, hazy distortion of the song is balanced quite beautifully with an underlying shimmering melody that differs from anything on the band’s first album.

In fact, Sleigh Bells’ second album is far from a straightforward follow up to Treats. For one thing, Reign Of Terror isn’t nearly as shocking. While the debut was a full-on, powerhouse of a record that was ear-splittingly loud, the former is a much more considered and restrained affair. Not that Reign Of Terror isn’t surprising. It just surprises in a completely different way. Take the breathy End Of The Line. The song is a thoughtful and delightful slice of glam pop, including the heart-rending line of “It’s the end/ of the line/ so goodbye”. It’s not alone, either. Road To Hell is another enchanting – if slightly dragged out – track, while the haunting You Lost Me and closer D. O. A. are both measured, dark and melancholic to the extreme.

Reign Of Terror is undoubtedly ambitious. The second half of the album does, at times, teeter on the edge of being overly gloomy, but there’s also a subtlety and variety that marks a significant progress from the band’s debut LP. That’s not to say that their second album doesn’t contain the moments of unfurled energy that abounded from Treats – they’re just less frequent. While Reign Of Terror may not possess anything quite as startlingly infectious as Infinity Guitars, Sleigh Bells’ return shows that they are more than a one-trick pony.