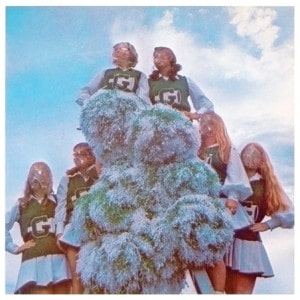 They’re from Brooklyn, they’ve got the blogosphere very excited and are signed to M.I.A.‘s own record label in the USA… wait, wait, where are you going… come back…

A degree of wariness is to be expected when confronted with yet another hipster-endorsed New York band – after all, there seems to be a different one every month. Yet, for once, it looks as if Sleigh Bells may just justify the hype – for from the very first note of Treats, you know you’re listening to something extraordinary.

Formed two years ago, Sleigh Bells are the unlikely duo of former girl group member Alexis Krauss and former Poison The Well guitarist Derek E Miller (a British equivalent may well be Nicola Roberts hooking up with Napalm Death‘s drummer). From this improbable pairing has sprung genuine musical alchemy; never has the genre of ‘noise-pop’ been more appropriately defined.

For, make no mistake, Sleigh Bells are incredibly noisy. Drums pound, serrated guitars are played to distorted levels, and if the album is turned up too loud (and you’ll want to play it loud), then you’ll genuinely start worrying about the state of your speakers. Yet underneath this intimidating racket is real pop magic and commercial clout. There are beats you can dance to and melodies to sing along to, helped no end by Krauss’ sugary-sweet vocals.

So imagine M.I.A. covering The Go! Team while being produced by Steve Albini and you’re halfway there. In fact, the cover of Treats sums it up best: a gang of cheerleaders posing for a photograph, but with their faces scratched out. It’s pop music, but not as we know it.

Tell ‘Em slaps down the listener as a statement of intent, with machine-gun drums and vicious riffs crashing in, until Krauss’ softly chanted vocals of “did you do your best today” incessantly hooks into your brain. The brilliant Infinity Guitars pulls a similar track, sounding very similar to the demo version that was floating about last year, until the final 40 seconds or so where the song explodes with almost unpalatable vigour and energy.

Only Rill Rill drops the tempo; perfectly placed near the middle of the album, its gorgeous, Funkadelic sampled beats provides the perfect respite from the sheer loudness of the rest of the album. It takes a couple of listens to realise that the lyrics are absolute nonsense (“click click, saddle up, see you on the moon then”) but this isn’t really an album for deep lyrical insight.

Perhaps the most incendiary track is Straight A’s, 90 seconds of sheer, balls out, screaming futurepop that makes Crystal Castles sound like The Saturdays. More subtle is Run The Heart, its eerie, spacey dub sounding oddly sexy, while the clattering, pounding Crown On The Ground feeds a cheerleading chant through a blender to come up with something completely otherworldly. It’s an album full of surprises – there’s even some twangy surf guitar to be heard on A/B Machines, while the title tracks appears, at one point, to turn into How Soon Is Now by The Smiths.

Weighing in at just 32 minutes, Treats can hardly be accused of outstaying its welcome. In fact, its brevity is its strength – too much aural pummelling could be too much. As it is, as soon as the album finishes, you’ll want to put it on again straight away. In fact, it’s so good that it does raise the legitimate question of whether Krauss and Miller will be able to follow it up. But that’s a question for the future. Treats is one of the most impressive albums you’ll hear this year.