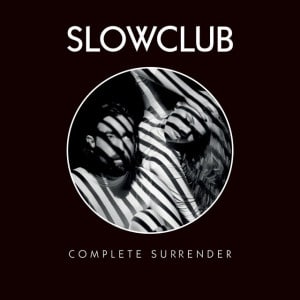 Back in 2009, Slow Club were a charmingly ramshackle act from Sheffield who’d use chair legs as makeshift drumkits and were so self-deprecating they took a disparaging YouTube comment about them (“just two fat toddlers playing at life”) and used it as their Twitter bio for a while. They were obviously massively talented – their gigs were joyful, life-enhancing affairs that begin in the middle of the audience and often ended up outside in the street) but their spiky indie-folk didn’t blatantly hint at a glittering pop career.

Since then, Rebecca Taylor and Charles Watson (neither of whom have ever resembled a fat toddler) have evolved into proper, grown-up pop stars. If in any doubt, just watch the video for the album’s title track. Shot in gorgeous black and white, it’s sleek, sexy and features, in no particular order of importance, dancing girls, lingering looks into camera and cute, fluffy cats. They’re a long way from Rotherham these days.

Complete Surrender is pretty much the perfect adult pop album. It’s full of great, big, swooning arrangements, swaggering horn sections and, at the heart of the record, a deep, aching sadness. For, as the old adage goes, all great art stems from great pain, and if this record is anything to go by, Rebecca Taylor has been through the emotional wringer somewhat. And while that’s always a pretty terrible thing to go through, it’s resulted in some of the most heart-wrenchingly honest songs you’ll hear all year, revealing Taylor to be something close to the missing link between Sharon Van Etten and Taylor Swift.

Take Suffering You, Suffering Me for example – on the surface, it’s a flawless Motown homage, seemingly made for a whole new generation of little girls to pretend a hairbrush is a microphone and design synchronised dance routines to. Yet, dig deeper and read the lyrics about a disintegrating relationship (“So I saw you turn from me the other night, right there I knew that I was losing you” runs the opening line) and the song takes on a bleaker hue. This trick is pulled several times through the album – the gorgeously poignant Not Mine To Love is one of the best break-up songs you’ll ever hear (and no doubt is already lined up as many people’s X Factor audition song), and the title track is a masterpiece in hooky pop, augmented by some dramatic string arrangements.

That’s not to mention the wonderful little gem that is The Queens Nose – the sort of song you’d have expected a cleaned up Amy Winehouse to come storming back with for her third album, a horn-laden soul-pop future classic which takes the spirit of Philadelphia soul and adds some Sheffield steel to it. It’s one of several songs that demonstrate Taylor’s impressive range, sounding emotionally bruised and battered but ultimately defiant – the sort of song that can give you goosebumps no matter how much you listen to it.

It would be a mistake too to overlook Charles Watson’s contributions to the album – the gorgeous Number One is easily amongst the best songs that Slow Club have ever written, a hushed piano ballad which shows off Watson and Taylor’s harmonies to their very best advantage, while Everything Is New has a gospel tinge thanks to some choral backing vocals that explode into life halfway through the track. The Pieces, meanwhile, is just a staggeringly catchy ode to friendship, and there’s even a name-check to ’80s kitsch act Kid Creole & The Coconuts in the closing Wanderer Wandering.

There should also be much credit given to Colin Elliot on production duties – Eliot has worked with the likes of Richard Hawley, Cherry Ghost and Tony Christie and gives Complete Surrender the sort of coolly lush arrangements that you’d associate with those acts. Even on a track like the downbeat Dependable People And Things That I’m Sure Of, possibly the only song which harks back to Slow Club’s acoustic roots, is given a gently swaying string section which only seems to accentuate the heartbreak that Taylor sings about in her lyrics (“all of this envy, and all of this fear, will just be a memory of this shitty year”).

By the time the spine-tingling hidden track after the closing Wanderer Wandering has faded out, you’ll be convinced you’ve heard one of the best albums of the year. As Taylor sings in Dependable People: “I just have to keep moving, don’t ever stop moving” – that restless quality has resulted in a break-up record that can stand shoulder to shoulder with the likes of Winehouse’s Back To Black and Adele‘s 21. It’s also an album that raises Slow Club up into a whole new level and should introduce them to a brand new audience. These ‘two fat toddlers’ are all grown up now.