Slow Club – One Day All Of This Won’t Matter Anymore 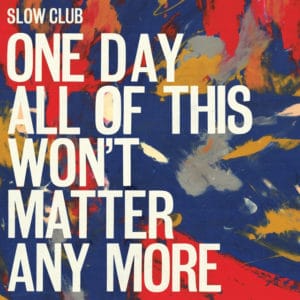 ‘s third album, Complete Surrender, seemed to be the record that would fire them into the mainstream. Full of pop-soul classics and heartfelt ballads, highlighting Rebecca Taylor’s belter of a voice and all wrapped up in the veneer of the heartbreak that comes with the end of a relationship, it was one of the classic break-up albums, and, in a parallel universe, has been number one for almost as long as that Drake song was.

Here, though, it went shamefully unrecognised, not troubling the charts nor picking up a Mercury Prize nomination. So what to do when the album that should have broken you into the mainstream performs against expectations? The answer, for Taylor and her band partner Charles Watson, seems to be to carry on in their own sweet way, doing exactly as they want.

One Day All Of This Won’t Matter Anymore is a very different beast to Complete Surrender, while retaining some of its key elements. It’s far more musically downbeat for a start, with an air of resignation and wistfulness hanging over most of the tracks. There are no big party anthems, no Motown tributes or Philly soul pastiches, just quiet and thoughtful laments about disintegrating relationships and the condition of the human heart.

It’s also the album in which Taylor and Watson have most obviously begun to assert their own individual personalities. Geographical differences have no doubt played their part in this (Watson now lives in London while Taylor has relocated to Margate), and the duo apparently wrote their contributions to the album separately instead of working on them together. The glue that holds them together is noted American singer and producer Matthew E White, who recorded the album in just over a week with his house band at his Spacebomb studio in Richmond, Virginia.

If Complete Surrender was a showcase for Taylor’s remarkable voice and sometimes painfully honest songwriting, the first thing to notice on ODAOTWMA is Watson’s increased presence – he takes lead vocals on half of the album’s twelve tracks, and although his storytelling lyrics differ from Taylor’s more heartfelt, autobiographical style, both work equally well under White’s guidance.

Watson opens the album with Where The Light Gets Lost, a song which typifies the understated, downbeat manner of the album. “I had my chance, and this is letting go”, he sighs, over a relaxed groove, which is followed by the gorgeous sway of Ancient Rolling Sea (there’s a definite water motif throughout). Watson also provides one of the lyrical highlights of the album in Tattoo, sardonically noting: “I hear that guitar music is coming back here everyday, so I look to the boys with their jaws on the floor, trying to remember the moment it went away”.

As ever, it’s Taylor who provides the emotional wallop – the beautiful, country-ish stroll of In Waves becomes better each time you hear it, Give Me Some Peace is a kind of restrained cousin to Complete Surrender’s The Queen’s Nose, all swaggering brass and soaring chorus, and The Jinx doesn’t so much tug at the heartstrings as tear them apart altogether.

It’s Rebecca Casanova which really stands out though, an absolute sparkling pop gem of a song which could well be the best thing Taylor’s ever written. The deceptively bouncy melody hides a sad tale of a break-up, and when she murmurs “I know you can’t hear me, but I’ll always love you”, well, it’s enough to break the stoniest of hearts. The Jinx is another gorgeous highlight, a yearning, hypnotic ballad which shows off Taylor’s voice at its very best, while the title track (appearing as a hidden track at the end) closes the album on a suitably melancholic note.

It could be argued that the album as a whole doesn’t quite hang together as well as Complete Surrender or Paradise, and there will always be some who miss the cheerful, ramshackle nature of the duo’s debut record Yeah So. Yet Slow Club have always reinvented themselves with each album, and this is another example of the talent of one of this country’s best kept musical secrets.