by Chris White
published: 3 May 2017 in Album Reviews
Tweet 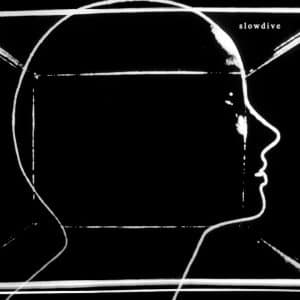 Back in 1991, the shoegaze scene had reached the zenith of its brief history. My Bloody Valentine’s extraordinary, genre-defining classic Loveless was released that year; Ride were the darlings of the indie press with their combination of fresh faces, floppy fringes and epic guitar anthems. It was also the year that Slowdive, the third member of shoegaze’s most enduring triumvirate, emerged with their debut album Just For A Day.

While My Bloody Valentine specialised in mind-bending sonic textures and Ride were all about soaring riffs and skyscraper harmonies, Slowdive’s music was much more stately and mellow, with strong folk and goth influences. Two further albums, Souvlaki (1993) and Pygmalion (1995), developed the Reading band’s sound further, with Souvlaki – considered by many fans to be their best – displaying more sophisticated songcraft and Pygmalion experimenting with electronica and samples. The latter – essentially a solo recording by guitarist/vocalist Neil Halstead in all but name – was Slowdive’s swansong, with their members going on to pursue various new projects, most notably Mojave 3, who released five acoustic-led albums in the early 2000s.

After reforming in 2014, with the original line up back in the fold, Slowdive’s eponymously titled return feels like they’ve never been away. It is telling that the album is produced by Chris Coady, who has performed the same role for Baltimore dream pop outfit Beach House. The influence of shoegaze on Beach House and other recent indie acts has long been evident, but listening to Slowdive’s new record here and now in 2017, with its searing clarity, enormous, ethereal sonic landscapes and hushed vocals, the symbiotic relationship is now inescapable.

Quite simply, this is a better comeback than any fan could dared to have hoped for. The omens were good when lead single Star Roving emerged earlier this year. Built around a gargantuan guitar figure that Halstead and Rachel Goswell’s voices circle like planets round a blazing sun, it set the tone for an album that confidently reasserts all Slowdive’s previous qualities, but with a modern contemporary sheen. Delivering an impressive combination of assured songwriting and atmospheric cascades of noise, it’s probably closest in style to Souvlaki, with little of the experimentation that Pygmalion attempted, and all the better for it.

Opening track Slomo is a graceful if low key reintroduction to Slowdive; two minutes of blissful swirls and dreamy, echoing peals of guitar before the ghostly voices of Goswell and Halstead are introduced. It’s predominantly a mood piece, which gives way to the sharper, bolder dynamic of Star Roving before we are taken back to the Cocteau Twins-influenced, looser style of Just For A Day with the beautiful Don’t Know Why. Sugar For The Pill shimmers prettily but at the same time has one of the most conventional, poppy choruses Slowdive have ever created.

The second half of the album isn’t quite as strong as the first. Everyone Knows and Go Get It are the closest we get to filler on the record, both feeling a little like Slowdive on autopilot. On the other hand, No Longer Making Time is a hauntingly hypnotic epic and closing track Falling Ashes provides a mesmeric, piano-led conclusion, very different in style to what’s gone before.

Often a band reforming after a long hiatus is little more than a nostalgia trip, motivated by money or creative inertia, but Slowdive have proved that it’s possible to maintain the essential DNA of your music while simultaneously sounding fresh and current. This is an album comfortably on a par with the work of most of the younger artists they’ve influenced; compelling proof that the original shoegazers have stood the test of time remarkably well.