Slowthai – Nothing Great About Britain

by Ben Devlin
published: 20 May 2019 in Album Reviews
Tweet 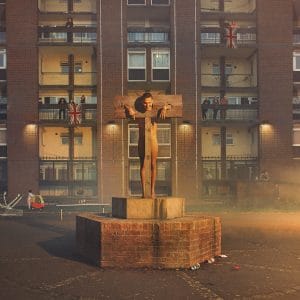 US rapper The Game always cut a tragic sort of figure. Even after considerable commercial success he seemed to be chronically stuck in the shadow of more popular rappers, to the point of mimicking the bigger personalities who featured on his tracks. Enter Tyron Frampton, aka Slowthai, The Game’s UK equivalent.

On Nothing Great About Britain he is pre-occupied with his place in the British rap scene, though instead of this being the topic of the songs, it pops up as subtext throughout the record. The end of the title track, in which he tells Elizabeth II “I will treat you with the utmost respect only if you respect me a little bit… you cunt”, sounded less forced when Dizzee Rascal did it on 2 Far.

Likewise, the lopsided beat and lazy delivery of Toaster is a Mike Skinner knock-off that would make a new generation wonder what was so revered about that early-’00s sound anyway. He also bends his style to fit Skepta on Inglorious, one of two tracks in which he is shown up by other rappers, and elsewhere he adopts a decidedly Stormzy-ish tone.

And what is there apart from these homages and imitations? Not much. The production shines at times, for example the punky thrash of Mura Masa-produced Doorman, but it’s undermined with clangers like “you make me melt, sun, ice cream”, and the sub-bass tones of Crack deserve better accompaniment than another ‘she’s a drug to me’ cliché.

Northampton’s Child has a brilliant trap-style beat which comes with one of Slowthai’s better performances, as if being more autobiographical implicitly encouraged him to find his own voice. But these moments are too few and far between to save a record that reveals the whirlwind of hype around Slowthai to be not much more than invisible garments on an arrogant emperor.

More on Slowthai
Slowthai – TYRON
Slowthai – Nothing Great About Britain