by Jude Clarke
published: 2 May 2011 in Album Reviews
Tweet 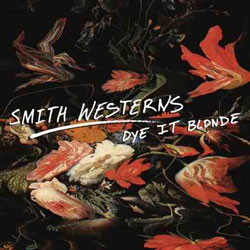 The Smith Westerns’ stock-in-trade is a blend of glam rock and Nuggets-era psych/garage with a dash of The Beatles thrown into the mix. None of these influences are particularly original, but will the Chicago band be able to breathe fresh life into old tropes on this, their second album, and come up with something inspiring?

It helps that they have a distinct way with a tune. Simply structured, old-fashioned, sing-along-able melodies can be found throughout – from the first track Weekend to the perky Imagine Pt 3 and the stomping End Of The Night.

But what really elevate the band’s music to levels that transcend their influences are the wonderful moments of what can best be described as musical sparkle that they produce. Like The Flaming Lips at their most wonderstruck, effects like Smile’s rippling layers of gentle keyboard arpeggios, or Weekend’s shimmer-and-shine opening add genuine beauty and a sense of marvel to the whole album, like fairy dust. This combines surprisingly well with a guitar sound that is at times almost studiedly cheesy, at others distinctly old-fashioned, but always interesting. The intricate guitar interplay on Dye The World is perhaps its best showcase, but the surf-ish Still New and the moments where it breaks through on Smile are also striking.

The lead vocal is reminiscent at times of Luke Haines of The Auteurs/Black Box Recorder (Still New, End of the Night), at others of Lennon (the Beatles-esque Fallen In Love). On tracks where it is unaccompanied – like Only One or Dance Away – it can pall and drag a little. It is as well, then, that so many tracks feature a choir-like backing vocal that is as euphoric and transcendent as the musical effects described earlier. These vocals contribute to some of the undoubted highlights of the album, like on the moving All Die Young, and the rich, textured and quite beautiful Smile: fit-to-burst with aural joy and a lushness of harmonies that would make even the Polyphonic Spree sound a bit undemonstrative and glum.

Lyrically, these seem to be mostly Songs About Girls. But the words – “Oh can’t you see / What you’re doing to me” (Imagine Pt 3), or “Are you a dream / Or something between” (Dye the World), for example – are somehow secondary and almost beside-the-point. When you have the knack, as this band most clearly have, of infusing your music with such full and rich emotion, then it makes sense to use that as your primary method of conveying meaning. Which the Smith Westerns undoubtedly do, on this twinkling little gem of an album.