Snapped Ankles – Forest Of Your Problems 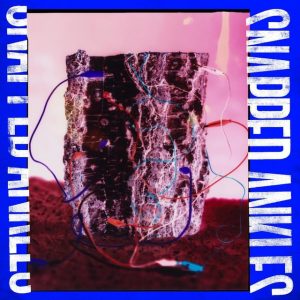 As we move hastily towards ecological elimination, Snapped Ankles, those arcane men of the forest now decamped to generic new build cubes in Hackney – having, in shame, swapped berries and roughage for the familiar delights of avocado toast and sand blasted terrazzo flooring – have peered inward and identified four atypical human responses to the destruction of our once verdant green spaces, and made an album pitched for the resultant dialogue that sprouts between the disparate reactions.

Their noticeably energetic interpolation of the sacred and the utopian, with more than a smidge of Prestwich motorik, hasn’t altered all that perceptibly, and subsequently, whilst the group’s message remains calcified in its tongue in cheek sincerity, the album appears tonally tempered and falls spatially flat.

Compositionally, by placing a semi-restrictive template upon themselves, the once profound collision of folkloric exotica and crackling post-punk ambiguities to be found on their iconic first two releases here becomes a shortcoming rather than the defining aspect of this, their third full length.

Retreating back to the once dense arbors from which they emerged and finding the psychological and geographical landscape forever altered, the group can’t seem to decide which response is most appropriate. Is it wisest to profit from change, to accept or ignore it or to forge a revolt back to consistency?

Cloaked in cross fading wipes and harsh rhythmic frictions, the band further attempt to talk to the trees, much like scientist Olivia Wendle in director Ben Wheatley’s recent technology vs ecology mind melter In The Earth, using loudness and shamanic repetition in order to excavate a common language from beneath the accumulated strata, and much like Wendle, they inadvertently end up succumbing to spectral decay.

Their fluctuating randomness trails away from scattered innovation and colourful variances in pitch and tone to become interchangeable noise. Without sufficiently varying their distinctive sound, they still serve a herbal tonic for the senses, even if there’s a decidedly bland aftertaste this time. Still, at least there are some nice vinyl options to put away on the shelf.