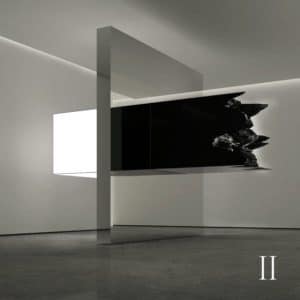 On Warning and Molecules, the first two tracks on Son Lux’s new album Tomorrows II, front man Ryan Lott’s expressively tremulous voice regularly cracks and falters, presenting him as a figure polished raw with remorse for his actions, unable to sustain the momentum that has propelled him thus far.

Although the group began life as an independently minded soul loving outsider hip-hop group on the Los Angeles based Anticon label, this record, which has been billed as the middle component of a proposed trilogy that seeks to address the unease inducing pressures of modern existence, eventually performs more as a companion piece to the luminous swooning of Sigur Rós’ Ágætis Byrjun and crushing politick found on Godspeed You! Black Emperor’s Yanqui U.X.O.

Principally led by wistful keyboard sonatas, there are some deep surges of bass and warped soul harmonising that course through tracks like Prophecy, as Lott’s skeptical vocals, often dwindling away into reverie, get processed through countless studio treatments and a series of wrecked gospel drum fills set out an erratic beat. On compositions such as Apart and the zen-like Out Of Wind, they mimic the panicky character of traditional koto players whilst on Leaves, the sound of plastic sampled grooves and lumpish drums accompany sleigh bells traipsing over minuscule tornadoes of piano. On the closing Borrowed Eyes, plucked strings appear to accelerate and brake before great armadas of noise break through its barricades.

Courageously exposing some innate fragility, this record finds an at times doleful but never beleaguered Lott, aided by his band mates Ian Chang and Rafiq Bhatia, breaking through hackneyed convention, placing his inquisitive voice front and centre, as they amplify their collective insecurities. Surrounding contemporary anxieties within a collage of expertly designated snatches of melody, the record feels slight at first glance before eventually revealing its complexities to the listener, without ever suggesting notions of self-pity.