Son Of Dave – Shake A Bone 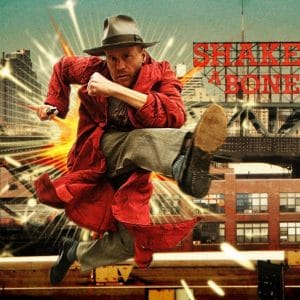 Much of blues music had become a string of clichés in the past 20 years, borrowing the tried-and-tired techniques of endless John Lee Hooker-inspired guitar riffs. It was safe and it got boring. But then came the resurrection, with the down-and-out Seasick Steve, the cigarettes-and-alcohol drenched blues of Amy Winehouse and the unconventional Son Of Dave, the nom-de-scene of Benjamin Darvill, sometime member of Crash Test Dummies.

The Canadian-born, London-based one man band is back with his fourth opus, Shake A Bone, recorded in just two weeks in Chicago with Steve Albini. On this album, which he refrained from naming 04 (his first three are O1, O2 and O3), he literally steps into the muddy waters of southern blues, dirty and hooky. There is something very primal in his sound. It’s rhythm and blues, raw and without artifice – the real deal. Much like the artist himself.

Son Of Dave is quite a character. Effortlessly cool, somewhat of a sly fox, he breathes life and exhales soul. Beneath his private detective style trench-and-hat combo, he dons ’50s three-piece suits and slides the urban sidewalks in brogues, before night falls and he descends to some clandestine underground club to break into a bluesy execution of what he refers to as “night-time music”.

The tracks on Shake A Bone are brief and to the point without that urge to break into interminable solos. Instead, Darvill relies heavily on his harmonica, shaker and looping pedal, as well as and his storytelling skills (he is an accomplished writer). Bluesmen are the griots of the Deep South, and the artist recounts tales of woe, sleaze and everyday life – sometimes all three combined.

Sitting on a porch on a lazy afternoon with a bottle of booze or inviting temptation in the local bar is where the blues finds its voice. In Stiletto, heels sashay across the wooden floors, the harmonica leading the way along with an incessant drumbeat. His voice is both sensuous and sore, and his delivery both facetious and weary. “There’s something about those high-heeled shoes that I don’t trust,” he warns gruffly. Ah, those Southern girls.

She Just Danced All Night tells the tale of a wayward teenager, one of those bad southern girls who lead men astray. But not him. He defends his honor by insisting that they only danced all night. And if there is a track to dance to in a slow-mo trance, it could be Voodoo Doll. The surprisingly upbeat Undertaker is accompanied by a beatbox that grinds deep within and the sax Ain’t Nothin’ But The Blues gives it another colour.

Every note of his harmonica adds to his stories and conjures up images so vivid that they transport you into his realm. It’s primitive, it’s sleazy and it was about time someone sang the blues like it is.

Son Of Dave MP3s or CDs

Son Of Dave on Spotify