Song Sung – This Ascension is Ours 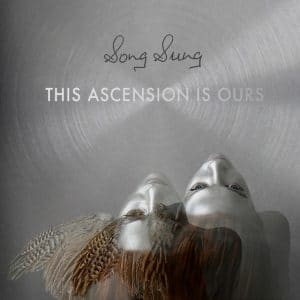 Song Sung is a psychedelic dream-pop band comprised of Irish-born, America-based twins Georgina and Una McGeough. Their new album, This Ascension Is Ours was co-written and produced (read: brought into existence) by soundtrack artists David Holmes and Keefus Ciancia, who are both members of Unloved, and responsible for the soundtracks to The Fall, Killing Eve, True Detective and more.

The success of The Ascension Is Ours is ultimately down to its exquisitely rendered sound design – the songs, with their ethereal haze and retro-futurist vibe, are a blend of Broadcast, The Shangri-Las, and, well, all of the bands on the Killing Eve soundtrack. All of these are tried and tested flavours, and while these are ultimately what make the album a triumph, they’re also what would make it a difficult listen for people not already familiar with this type of sound. See, most of the songs are constructed of the same basic formula, and all of the tracks seem to run a little long.

The highlights of the album are the fantastic TellingTales, with its superb chorus and hazy, woozy atmospherics, and Testimony Of Tears, with its muscular bass and gradually increasing tension, are genuinely thrilling pieces. The Mind’s Eye is another standout, and it sounds like a forgotten girl-group 7” playing in The Jesus & Mary Chain’s distorted wonderland (or, put simply, it sounds like The Raveonettes). The other songs on the album largely use the same palette, and draw from the same type of sounds – but there’s a lot to be said for consistency. Many of the bands that Song Sung draw from made similarly stylistically consistent debut albums (have you heard Psychocandy?), and ultimately it will be this level of one-notedness that means you love the album or are bored by it.

Many of the bands that have ploughed similar ground have had success (Vanishing Twin, Exploded View, Jane Weaver, Le Volume Courbe), because there feels like there’s more variety in their songwriting. But this is a debut album, and there is a lot of potential here. If you’re a fan of any of those bands, then this should be an immediate listen, but if not, this is a harder sell. Enter with an open mind (and a spare hour), and you’ll have a good time.

More on Song Sung
Song Sung – This Ascension is Ours