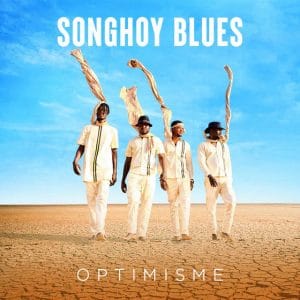 If you come to the third Songhoy Blues record thinking this is going to be more of that instantly recognisable granola/Birkenstocks/family friendly ‘World Music’ you think you know from Paul Simon or the WOMAD festival, you might want to take a seat and strap in, because things are about to get really unstable really quickly: Optimisme is more Garageland than Graceland in its approach.

The aggressive drums that herald opening track Badala allude to Dave Grohl’s killer intro on Nirvana’s Stay Away, while the guitar riffs, steeped in the Western blues tradition of Led Zeppelin’s back catalogue, lash out with a malevolence reticent of teenage favourites like Rage Against The Machine and Papa Roach.

It’s not until the vocals come in, sung and screamed as they are in the group’s native Songhai, that you remember this quartet of young rock warriors hail from the scorched landscape of war stricken Mali, not the dank factories and garages of Detroit or Chicago. That exposure to conflict, impoverishment and discontent means the optimism the Timbuktu outfit infer in the title doesn’t appear to be present initially, especially in the song’s chorus, which roughly translates, as “We don’t give a shit”.

Their flammable classic debut five years ago was produced by Nick Zinner; he of the Yeah Yeah Yeahs, and to keep that indie rock light alive, they’ve recruited the dexterous hand of Chavez’s Matt Sweeney for this effort. It is the sound of turmoil and transitional surroundings. On tracks like Assadja, Sweeney has wrapped their signature urgent but elusively filigree guitar work around the foregrounded drums, letting them take root, rather than have them bouncing off one another.

Both the funk stomper Bon Bon and the highlife inspired Fey Fey feature jumpy guitar signatures that John Frusciante would be proud of, and the tracks Bare and Korfo foam and twist like dust storms carried across the breeze. Worry, the albums sole track sung in the English language, begins with the near saccharine positivity of early Beatles quickly giving way to a coda reminiscent of late ’70s John Lennon, a man at his most politically defiant, with the lyric morphing from “don’t worry, you’re going to be happy” to a pleading chorus of “Keep fighting today”.

It can be draining having to fight all the time and on Pour Toi and the album closer Kouma, the closest you’ll probably ever get to an acoustic number from Songhoy Blues, you start to see signs of them pursuing a little calm into their world, and all that frustration and exuberance that’s become their trademark, live and on record, is replaced with tiny sparks of hopefulness.