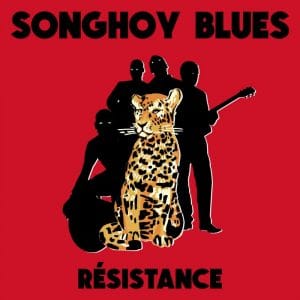 There are few more blissful and infectious sights in music than a Songhoy Blues performance in full flow: Garba Touré, Aliou Touré, Oumar Touré (no relation) and Nathanael Dembélé vibing off each other – chicken-dancing across the stage, arms outstretched, grins the size of planets – until those actions and planet-sized grins are mirrored in every figure in the crowd.

The sound is pretty blissful and infectious too, as influenced by Jimi Hendrix and The Beatles as local legends Ali Farka Touré and Toumani Diabaté; their music’s ‘up’ nature and generosity of spirit is quite remarkable given that the group was born both out of necessity – they were forced to leave their homes in Timbuktu during Mali’s civil confilct and take refuge down south – and out of a desire “to recreate that lost ambience of the north and make all the refugees relive those northern songs”. Debut Music In Exile, produced by Nick Zinner of Yeah Yeah Yeahs, did a better job than most at capturing that “lost ambience” and live energy on tape – aided by associations with Zinner and Damon Albarn and a release through indie label Trangressive, not to mention those life-affirming live shows, it reached a large, appreciative audience.

The Re-Covered EP could just be viewed as an opportunity to extend that first album’s promotional campaign without having to write any new material, but Songhoy Blues’ three choices of covers felt revealing and significant: one track shared the group’s love for clashing cultures (Led Zeppelin’s east-meets-west epic Kashmir), one track was taken and recontextualised within their own narrative (Should I Stay or Should I Go), and one track – we now know – pointed towards where they were heading next – Manu Dibango’s dancefloor filler Soul Makossa, considered to be one of the first disco records.

Teaming up with M.I.A. and Django Django producer Neil Comber, the group have talked about wanting to create something more universal and affectionate towards their homeland. Comber has patted off some of the dust, gave the guitars added glint, made the synths – courtesy of Luxury – sparkle and whoosh. As a result, on second LP, Résistance, Songhoy Blues feel not only like the ultimate festival draw but also the party band par excellence.

Bamako, a nod to the capital of Mali where the group were formed, is straight fire – an electrifying concoction of chucking guitar, horn fanfares and siren-like synth transmissions that’s the equal of Parliament or any of the fabulous African disco-funk reissues released on Soundway and PMG in recent years. Yersi Yadda is equally fire-starting and funky – the added instrumentation bringing further dimensions to the Songhoy Blues explosion. Badji and Ir Ma Sobay are twitchy, tricky customers, guaranteed to delight and test the dance skills of audiences in equal measure.

Voter begins with the group playing an R&B-flavoured variation on the first album’s desert blues groove; it reaches for the Higher Ground of Stevie Wonder, before taking a sharp left-turn into the kind of frenetic riffing more commonly associated with Josh Homme’s desert-dwelling bruisers Queens Of The Stone Age. Dabari has a similar sense of urgency and steel, while Homme’s mate Iggy Pop lends his unquestionably cool but increasingly ubiquitous tones (in the last few months he’s also provided unmistakeable narration for PINS’ Aggrophobe and Alt-J’s In Cold Blood video) to Sahara, his voice twanging like a guitar as he contrasts North Africa with America (“It’s a genuine culture, no Kentucky fried chicken”). The track pulls up three minutes into its camel ride, but could have easily continued on its path for a while longer without anyone getting the hump.

Ici Bas is the one moment that perhaps sticks a little too closely to what the group have done previously, while track nine of 12, Ir Ma Sobay, is – like so many track nines of 12 – an adequate but inessential mood maintainer. South London grime artist Elf Kid‘s verse on Mali Nord highlights the importance of remembering one’s roots is admirable, and his appearance taps into the global mood of the record, but it also feels jarring and bolted on; fighting to be heard over a pileup of brass, he sounds rushed, as if desperate to fit the feature in during his lunch break.

Fans of softer, more soulful Music In Exile cuts such as Jolie and Desert Melodie will find Hometown and One Colour near impossible to resist. The former has a lovely, easy-osy backyard feel, complete with splendid fiddle work, reminiscent of Three Track Shack-period Link Wray; the latter’s effortless shifts in language from Malian to English are completely in keeping with its messages of universality and togetherness. “Together, yes we can!” is the jubilant chant, courtesy of the group and a children’s choir. “Trumpets, guitar together, making this song so sweet” they sing, and they’ve got a point.